CINCINNATI, OH (November 22, 2016) – Three polar bears from three different Zoos traveled a combined 1600 miles to their new homes yesterday.  Cincinnati Zoo & Botanical Garden’s beloved Berit, escorted by a keeper who has cared for her throughout her 16 years in Cincinnati, arrived at the Henry Vilas Zoo in Madison, WI, after a seven-hour drive and quickly settled into the spot vacated hours earlier when Sakari left for the Buffalo Zoo.  Buffalo Zoo’s Anana was midway to Cincinnati by the time Sakari arrived to occupy her space.

“The population of polar bears in our Zoos is declining and reproductive rates are low, therefore it is essential that Zoos all work together and exchange bears when necessary to provide the best chances for reproductive success,” said Dr. Terri Roth, Director of the Zoo’s Center for Conservation & Research of Endangered Wildlife (CREW). “Our Zoo population can be a critical resource for scientists studying the impact of climate change on this arctic icon.”

The complicated, multi-Zoo shuffle was recommended by the polar bear Species Survival Plan (SSP), the Association of Zoos and Aquariums’ (AZA) advisory group that manages the population in North American Zoos when it became clear that 17-year-old Berit and her mate, 26-year-old Little One, were not going to produce offspring.

“Berit and Little One have been together since 2007 and, although they have demonstrated appropriate breeding behaviors, Berit has never produced cubs,” said Dr. Erin Curry, the reproductive physiologist at Cincinnati Zoo’s CREW dedicated to polar bear research. “Anana is of prime reproductive age (16) and has produced cubs in the past, but due to the current shortage of sexually mature males in the population, she is left without a male to breed. Because Little One is genetically valuable, he and Anana were deemed a good match by the Polar Bear SSP. While we will be sad to say good-bye to Berit, the recommended moves are in the best interest of the polar bear population as a whole, and we are excited at the possibility of Little One becoming a father and passing on his genes to future generations.”

After settling into her new home, Berit will be introduced to a four-year-old female named Suka. Sakari, Suka’s brother, will be a companion and possibly a future mate to Anana’s cub, Luna, who was born at the Buffalo Zoo in 2012 and is roughly the same age. Anana will join Little One in Cincinnati and, if all goes well, could breed this spring and produce cubs as early as next fall.

CREW monitors the reproduction of polar bears living in Zoos throughout North America and will continue to monitor Berit.  “Studying bears in Zoos provides unique opportunities for research that would not be feasible with wild bears. Because it is challenging to collect serial samples from the same bear in a field setting, scientists use bears like Berit, Little One and Anana as models to learn more about the complex physiology of this species,” said Curry.

“While we are sad to see Sakari go, we know that we are helping preserve the population of polar bears in North America by sending him to Buffalo Zoo to be with Luna.” said Henry Vilas Zoo Director, Ronda Schwetz. “We are very excited to be receiving Berit from Cincinnati and look forward to working with CREW to learn about advanced AI techniques for polar bears and hopefully produce cubs in the future.” 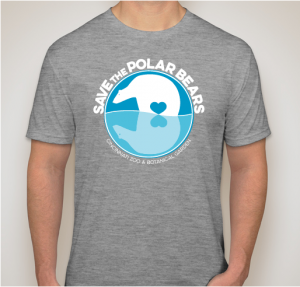 After vet checks and some time to get comfortable in her new home, visitors will be able to see Anana and Little One in the Kroger Lords of the Arctic exhibit.

To support polar bears locally, take the Polar Bear Challenge. The Cincinnati Zoo is working to raise a total of $35,000 by December 31st for CREW’s Polar Bear Signature Project. Donations to the Polar Bear Challenge will be matched by the Young Family Foundation & an anonymous donor. Donate online or purchase a polar bear shirt (limited-time) to contribute. By purchasing a polar bear shirt, you are helping to support the Cincinnati Zoo’s Center for Conservation and Research of Endangered Wildlife (CREW) as it works to create a more stable future for the world’s threatened polar bears.