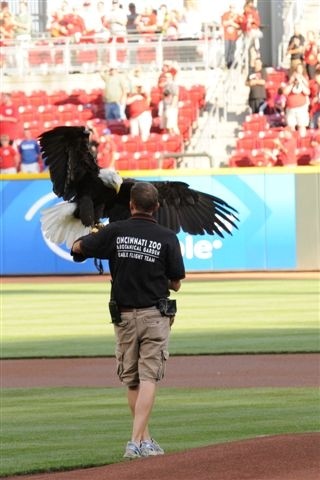 CINCINNATI (February 2, 2017) –The Cincinnati Zoo & Botanical Garden’s bald eagle “Sam” will take flight again this year for the Cincinnati Reds home games at Great American Ball Park. Sam, who just turned 18, will fly about 340 ft from the party deck in center field to the pitcher’s mound at the end of the National Anthem, before June 2nd, June 6th, June 16th, June 29th, and July 14th home games. He has flown at more than 50 games since his first flight in September of 2003.

The bald eagle and stories like Sam show a great conservation success story for this species.  In the early 1960’s bald eagles were vanishing from the lower 48 states.  In 1963, only 417 nests were in all of the lower 48 states. Ohio only had 4 nests, Kentucky had none. It looked like in a lifetime bald eagles could go extinct.  In 1973, bald eagles were listed on the Endangered Species Act.  DDT, a pesticide widely used by farmers to control insects, accumulated in eagles and when they laid eggs the shells were too thin and eagle populations plummeted. The protection of individual birds, banning of DDT in 1972 and a breeding program by institutions like the Cincinnati Zoo has lead to an incredible come back for the bald eagle.  De-listed from the Endangered Species List in 2007, there are now roughly 10,000 bald eagle nests in the lower 48 states, about 200 in Ohio and about 100 in Kentucky.