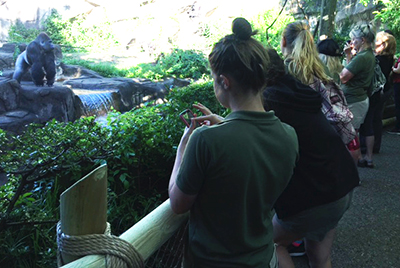 CINCINNATI  (June 7, 2016) – After being closed since the tragic death of 17-year-old silverback Harambe on May 28, 2016, the Cincinnati Zoo & Botanical Garden’s Gorilla World exhibit reopened to the public this morning.

“This has been a difficult and emotional time for everyone at the Zoo, especially Harambe’s caretakers.  We’ve never been through anything like this, and the experience has been surreal,” said Zoo Director Thane Maynard. “I see today’s reopening as the symbolic start of a healing process for our staff, our members and the Cincinnati community.”

Zoo employees and volunteers gathered in Gorilla World early this morning, before the Zoo opened, to see gorillas for the first time in ten days.  “We have been leaning on each other to get through this,” said Maynard.  “Coming together this morning was cathartic. It will take time for us to heal, but we’re moving in that direction.”

Before reopening the exhibit, the Zoo installed a new, taller public barrier with knotted rope netting and surveillance cameras.  Approximately 43 million people have visited Gorilla World without incident in the 38 years that it’s been open.  “The exhibit was safe, but, in light of what happened, we made modifications to reassure our visitors and the public,” said Maynard.

The family group of eight that includes three little ones and is headed by silverback Jomo, was out this morning. “Many people have asked how our other gorillas are doing.  Their caretakers have been telling us that they’re fine, but seeing them go about their usual routine this morning made all of us feel better,” said Maynard.

In addition to fortifying the gorilla exhibit, the Zoo is redoubling its efforts to support wild gorilla conservation. The Cincinnati Zoo is proud to have supported and partnered with the Mblei Bai Study and related gorilla research efforts in North Congo for the past 15 years. In response to thousands who expressed a desire to do something positive in the wake of last week’s tragedy, the Zoo is raising funds in Harambe’s honor to be donated to the Mbeli Bai Study.

The Zoo is home to ten western lowland gorillas. There are about 765 gorillas in zoos worldwide including approximately 360 in the Association of Zoos & Aquariums (AZA) Species Survival Program (SSP) for this species. Western lowland gorillas are critically-endangered in the wild, with less than 175,000 individuals. Due primarily to habitat destruction caused by logging, mineral mining and agricultural expansion, wild gorilla numbers continue to shrink.