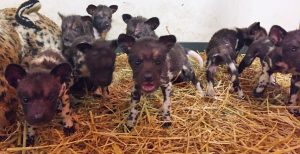 “The only thing our primary painted dog keepers love as much as dogs is cheese! The cheese theme had an added bonus of offering a large variety of name options,” Said Christina Gorsuch, Curator of Mammals at the Cincinnati Zoo and Vice Coordinator of the African Painted Dog Species Survival Plan (SSP). “African painted dogs are born white and black with portions of the black turning to gold when they are 6-8 weeks old. The white marks remain the same from birth; these unique markings will help keepers identify each pup for future vaccinations, physical exams, and day-to-day care. They will eventually learn their names which allow keepers to train them individually and teach important husbandry behaviors.”

All pack members are participating in the rearing of the eleven pups (one of the litter of twelve did not survive). “The pups are seven weeks old and completely weaned from their mom’s milk onto meat. The entire pack is fed together 3-4 times a day in order to keep up with the demand of the growing puppy appetites. Anything the pups don’t eat is consumed by the four adults who will regurgitate meat for the pups throughout the day and night. They have incredible puppy energy and are running circles around the adults; everything is new and very exciting for them,” said Gorsuch.

Painted dogs are one of the most endangered carnivores on the continent, with fewer than 5,000 dogs concentrated in parts of southern and eastern Africa. There are approximately 139 animals (55 males, 49 females, and 35 unknown sex) distributed among 33 North American Zoos and 564 in Zoos worldwide. The Cincinnati Zoo is currently home to 15 painted dogs.

The pack has access to the outdoor exhibit when temperatures are above 50 degrees, so the first public viewing of the pups is likely to be in early spring. Here’s a handy identification guide from keeper Dana Burke (learn more about the pups’ personalities in today’s blog post by Dana).

About Painted Dogs and Conservation Efforts

African painted dogs, known for their large, round ears and beautiful, multi-colored coats, could once be found all over Africa.  Today they are one of the most endangered carnivores on the continent, with fewer than 5,000 dogs concentrated in parts of southern and eastern Africa.
The Cincinnati Zoo supports the conservation of African painted dogs and other wildlife in southern Tanzania through the Ruaha Carnivore Project (RCP).  The RCP works with local communities to ensure the survival of carnivores and people in and around Ruaha National Park. The third largest African painted dog population lives in the Ruaha region and is also home to 10% of Africa’s lions.  The RCP documents the presence and location of wildlife species through community-reported sightings and photos taken by motion-triggered cameras, or camera traps.  The project aims to gather baseline data on carnivore numbers and ecology and work with the local communities to reduce human-carnivore conflict.