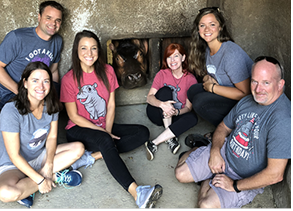 Silver Spring, Maryland (October 3, 2018) – The Association of Zoos and Aquariums (AZA) announced that Cincinnati Zoo & Botanical Garden has been recognized with the 2018 Excellence in Marketing Award for innovation in the zoo’s #TeamFiona campaign. Cincinnati Zoo received this national award last week at AZA’s conference in Seattle.

The AZA Marketing Award recognizes excellence in marketing campaigns developed and executed by its AZA member institutions. The campaign must utilize a marketing mix with a minimum of three communication channels, such as television, radio, print advertising, outdoor, internet, direct mail, or other media.

“Powerful, engaging messaging is critical to advancing the public’s understanding of the role AZA-accredited zoos and aquariums play in animal welfare and conservation,” said AZA President and CEO Dan Ashe. “This award recognizes the creativity and expertise of the marketing team at Cincinnati Zoo for developing engaging, imaginative ways to share our mission and our stories.”

There’s no record of a premature Nile hippopotamus surviving, and the odds were not in 29-pound Fiona’s favor. But a team of Zoo vets, neonate specialists, animal staff and nutritionists surrounded her on the day she was born and did everything they could to save her.  It was a remarkable scene to witness and had to be shared with the world.

The Cincinnati Zoo & Botanical Garden broke from traditional PR protocol, which would be to wait at least a day or two (or 30) to announce a birth, and decided to tell this unprecedented story as it happened.  They took people along on the emotional rollercoaster ride that started on the day that Fiona was born.  As the Zoo shared the ups and downs, more and more people considered themselves part of #TeamFiona.

“It’s an honor to be recognized by the AZA and our peers for doing great work,” said Cincinnati Zoo Director Thane Maynard. “No one could have predicted that Fiona would become an international celebrity.  She’s an incredible ambassador for her species and others that share the Nile hippo’s habitat in Africa. I’m proud of our marketing team for achieving the goal to restore a positive impression of Cincinnati Zoo and to shine a light on the excellent care that animals in AZA Zoos receive.”

To learn more about Fiona’s story, watch The Fiona Show on the Facebook Watch platform or Google Fiona the hippo!

About the Cincinnati Zoo & Botanical Garden

The world-famous Cincinnati Zoo & Botanical Garden is committed to inspiring visitors to care about wildlife and wild places.  It has been rated the #1 attraction locally and one of the top zoos in the nation by Zagat Survey.  It has also received rave reviews from Child Magazine, Parents Magazine, USA Today and TripAdvisor.  Over 1.6 million people visit the Zoo’s award-winning exhibits, and more than 500 animal and 3000 plant species annually. The Zoo, an accredited member of the Association of  Zoos & Aquariums (AZA), is internationally known for its success in the protection and propagation of endangered animals and plants and engages in research and conservation projects worldwide. Known as the #GreenestZooInAmerica, the Zoo is doing its part to conserve natural resources that are critical to saving wildlife and its habitats and is committed to greening its daily operations and reducing its impact on the environment through the use of rain gardens, recycled building materials, solar panels and more. The Cincinnati Zoo is a 501(c)(3) nonprofit organization.

Founded in 1924, the Association of Zoos and Aquariums is a nonprofit organization dedicated to the advancement of zoos and aquariums in the areas of conservation, animal welfare, education, science, and recreation. AZA is the accrediting body for the top zoos and aquariums in the United States and eight other countries. Look for the AZA accreditation logo whenever you visit a zoo or aquarium as your assurance that you are supporting a facility dedicated to providing excellent care for animals, a great experience for you, and a better future for all living things. The AZA is a leader in saving species and your link to helping animals all over the world. To learn more, visit www.aza.org.