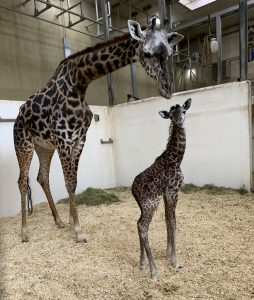 “Our Zoo Volunteer Observer (ZVO) team has been monitoring Cece overnight for almost a month,” said Cincinnati Zoo’s Curator of Mammals Christina Gorsuch.  ‘They noticed signs of labor at about 4:51 this morning and notified the giraffe team. The calf arrived about an hour later!”

The six-foot-tall calf stood within an hour after birth and started nursing soon after that. Cece’s experience the second time around was much smoother than her first.  That time, three years ago, she and her female calf couldn’t quite figure out the mechanics of nursing.

“We’re all sad that Kimba isn’t here to meet his seventh calf but thankful that he made such an important contribution to the survival of his species,” said Gorsuch.  “This baby, and five-month-old Fenn, will ensure Kimba’s lasting legacy.”

This is the 17th giraffe born at the Cincinnati Zoo since 1889, when the first giraffe calf to be born in any Zoo in the Western Hemisphere arrived.

After nearly 15 months of gestation, a baby giraffe drops to the ground head first! The fall and the landing do no hurt the calf, but they do cause it to take a big breath. To prepare for the birth, keepers added 6-8 inches of sawdust in Cece’s indoor bedroom and placed hay on top of large rubber mats to cushion the calf’s fall and to provide excellent footing for the calf once it began to stand. The outside yard has been baby-proofed with canvas.

In 2018, giraffes were listed as Vulnerable on the IUCN Red List. Giraffe populations are suffering from habitat loss, trophy hunting, illegal poaching and war-stricken habitat. The Cincinnati Zoo supports wild Maasai giraffe conservation by offering “behind the scenes” tours with proceeds going to the Wild Nature Institute. Visitcincinnatizoo.org to schedule a tour.

NOTE: We will make an announcement when visitors can expect to see the new baby.