CINCINNATI  (May 11, 2015) – Cincinnati Zoo’s Center for Conservation & Research of Endangered Wildlife (CREW), a world leader in small cat reproductive research, has successfully produced the first non-human offspring – of any species – using vitrified sperm (semen preserved as glass instead of ice) for artificial insemination (AI).  The only other reported birth from AI using vitrified sperm was a single human baby produced at a fertility clinic in Chile in 2011. 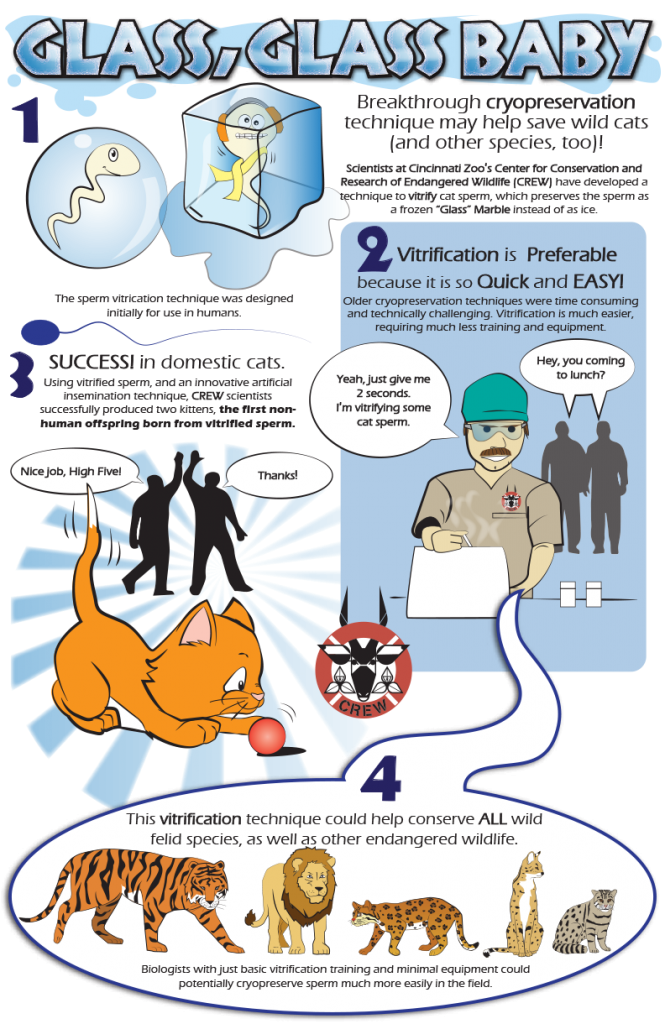 Two healthy kittens, a male named “Vito” (short for vitrification) and a female named “Elsa” (after the character in the movie Frozen), were born at Cincinnati Zoo & Botanical Garden in late April.

They were conceived following laparoscopic oviductal AI (LO-AI) using domestic cat sperm preserved by vitrification – a novel cryopreservation method that involves ultra-rapid freezing in liquid nitrogen to form a ‘glass’ rather than ice crystals.  The technique is extremely quick and simple to perform and might be useful in the field for wildlife veterinarians and biologists who are working with wild cats and want to collect and preserve their semen.

“Cryopreservation of cat semen for assisted reproduction can be challenging, requiring technical expertise and specialized equipment.  The use of vitrification simplifies the process and makes it possible for almost anyone with minimal training and supplies to freeze semen. This breakthrough could allow us to expand semen banking of endangered cats throughout the world to aid in their conservation,” said Dr. Bill Swanson, CREW’s Director of Animal Research and one of the world’s authorities on breeding endangered small cats.

Initial studies by CREW determined that cat sperm survived vitrification successfully and that vitrified sperm were capable of fertilizing cat oocytes in vitro. “To assess in vivo viability, we inseminated three females with vitrified sperm” said Swanson. “All three females conceived, with two of the pregnancies progressing to term and culminating in the birth of two kittens to “Ebony” (the mother of Vito), and “Ivy” (the mother of Elsa).”

Preliminary results with semen from fishing cats and ocelots indicate that vitrification is effective for preserving post-thaw sperm viability and function across cat species.  Although no AI procedures have been conducted yet with vitrified sperm in these wild cat species, AI success in domestic cats suggests that it may be possible to use this approach to produce fishing cat or ocelot offspring at a future date.

The lead author of this study, veterinary student JaCiara Johnson, has been selected to present these results at the upcoming American Association of Zoo Veterinarians’

(This research was funded, in part, by the Procter & Gamble Wildlife Conservation Scholarship program in collaboration with Ohio State University’s College of Veterinary Medicine)Annual Meeting in Portland, Oregon.  JaCi already has dibs on adopting Vito; Elsa also has a good home waiting for her.

For vitrification, cat semen is diluted in a chemically-defined medium containing soy lecithin and sucrose as cryoprotectants and, after a five minute equilibration period, pipetted in small volumes (~30 microliters) directly into liquid nitrogen to form tiny glass marbles of frozen sperm.  The procedure is extremely simple to perform, requiring only a plastic transfer pipette, vitrification medium, and liquid nitrogen, and can be conducted by anyone after only brief training.

CREW scientists pioneered the application of the laparoscopic oviductal AI (LO-AI) technique in domestic cats and performed the first successful oviductal AI in any wild cat species, producing a Brazilian ocelot kitten at Connecticut’s Beardsley Zoo in 2011.  LO-AI combines minimally invasive surgery with oviductal insemination, in which semen is deposited directly into the oviducts, increasing the chances of motile sperm reaching and fertilizing an egg while requiring very low numbers of sperm.

“Small cats are, by definition, small in size – and that adjective applies to the volume of their ejaculates as well.  Sperm numbers in small cats often number in the single millions, not the tens or hundreds of millions that can be collected from tigers or other large cat species.  But oviductal AI is helping to level the playing field.  By depositing the semen deep into the oviducts close to the site of fertilization, high pregnancy percentages can be obtained using only a few million spermatozoa for AI,” said Swanson.