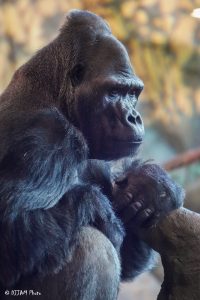 CINCINNATI, OH (October 10, 2021) — Since silverback gorilla Ndume’s return to his original home at the Cincinnati Zoo & Botanical Garden in June of 2019, he has been living with two female gorilla companions and has formed bonds with his care team in Gorilla World, where the troop enjoyed some seasonal enrichment to celebrate his 40th birthday.

“It’s hard to believe that he’s only been here for just over two years,” said Cincinnati Zoo’s gorilla team leader, Ashley Ashcraft. “He arrived right after we completed our indoor habitat, which includes modern, flexible, and specialized gorilla living areas, so he has been set up in a really good situation.  Most importantly, he has companions.  Gorillas and humans are close relatives and share many things in common, like their social needs.  Gorillas desire the company of other gorillas.”

That’s the main reason that the Zoo brought Ndume back to Cincinnati.  His companion since 1991, Koko, passed away in 2018, making him the sole gorilla at the California facility where they lived.

“Ndume is enamored with the girls, especially Mara,” said Ashcraft. “All of his social and physical needs are being met, and he is quite agile for his age.  We are prepared, however, for when age starts to slow him down.   Special, proactive modifications, such as switchbacks to minimize vertical climbing, were built into the new indoor space to accommodate geriatric animals.”

Because the gorilla keepers have earned Ndume’s trust, he participates in his own health care. He allows keepers to conduct cardiac ultrasound exams using only positive reinforcement.  Gorillas are prone to heart disease, especially in older males, so the ability to perform these preventative checkups in a non-invasive way is vitally important.

“We are thrilled to be able to provide Ndume with an excellent home,” said Ashcraft. “His top priority is watching over his troop, which is exactly what a silverback gorilla is supposed to do!”

The Cincinnati Zoo has been caring for gorillas since 1931 and has made significant contributions to gorilla populations in Zoos across the country.

The Cincinnati Zoo supports wild gorilla conservation efforts like the Nouabalé-Ndoki Project in the Republic of Congo.  This project includes the Mbeli Bai Study, the longest running research being done with wild western lowland gorillas.  Through research, local education programs, publications and documentaries, the Mbeli Bai Study and other gorilla related efforts there are raising international awareness for gorillas and their struggle for survival. For more information, visit www.cincinnatizoo.org .