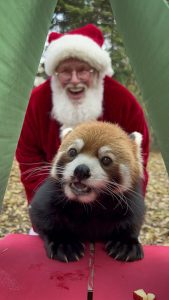 Last Chance to Visit Santa at the Cincinnati Zoo

See Santa this week before he leaves for the North Pole

CINCINNATI (December 20, 2022) –   Santa’s sleigh is almost at full power after weeks of soaking in Christmas spirit from PNC Festival of Lights visitors at the Cincinnati Zoo & Botanical Garden.   It will be ready to carry him to the North Pole after his final Zoo appearances this week.

“Kids and animals look forward to seeing Santa every year during PNC Festival of Lights,” said Cincinnati Zoo director Thane Maynard. “Some first-time Santa visitors get a little shy around him, and that was the case with baby hippo Fritz when the big man dropped off presents for the hippos last week. The other hippos, elephants, red pandas, and Rico the porcupine happily tore into their gifts.”

PNC Festival of Lights, which was just voted Best Zoo Lights by USA TODAY’s readers for the fifth year in a row, will be closed on Christmas Eve and Christmas Day, and will reopen on Monday, December 26.  It runs through January 8, 2023.

“Santa will be gone, but there’s still plenty to do,” said Maynard.  “It’s a great opportunity for those who receive memberships as a holiday gift to come out and see why PNC Festival of Lights is the best!  It’s also a great destination for families that want to ring in the New Year before midnight!”

The spectacular lights are the main attraction during PNC Festival of Lights. Visitors coming to see animals should come earlier in the day or visit indoor habitats such as World of the Insect, Manatee Springs, and Night Hunters during the evening hours.