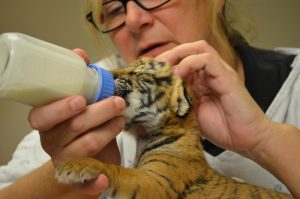 CINCINNATI, OH  (February 7, 2017) –  Three Malayan tiger cubs were born on Friday, February 3, at the Cincinnati Zoo & Botanical Garden and are now being cared for in the Zoo’s nursery.  First-time mom Cinta’s maternal instincts did not kick in and vets, concerned that the cubs’ body temperatures would dip too low without the warmth of mom’s body, made the call to remove them from the den.

“It’s not uncommon for first-time tiger moms not to know what to do.  They can be aggressive and even harm or kill the cubs,” said Mike Dulaney, curator of mammals and vice coordinator of the Malayan Tiger SSP. “Nursery staff is keeping them warm and feeding them every three hours.”

The cubs will be cared for in the nursery for now and will move to Cat Canyon when they’re weaned and no longer require constant care.   Visitors should be able to see them playing and running around in their outdoor habitat in early spring.

“The three will grow up together.  They will not be re-introduced to their mom as she would not recognize them as her own after a prolonged separation,” said Dulaney. 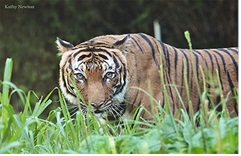 Three-year-old Cinta is the 2nd most genetically-valuable female in the Zoo population, and dad, 15-year-old Jalil, is the 3rd most genetically-important male.  This combination of lineage gives these cubs the opportunity to contribute much-needed genetic diversity when they eventually receive breeding recommendations from the Malayan tiger Species Survival Plan (SSP), the group that manages the health of the population in the 28 accredited Zoos that care for this subspecies.

Jalil sired four male cubs at the Cincinnati Zoo in 2009.  They were raised by their mother, Hutan, and are now living at other Zoos. 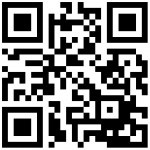 Consumers can do their part to protect tigers and their rainforest habitat by choosing products made with certified sustainable palm oil. The Sustainable Shopper app connects you with more than 500 products manufactured by companies certified by the Roundtable on Sustainable Palm Oil. Simply download the app onto your Smartphone and take it with you when you go shopping.