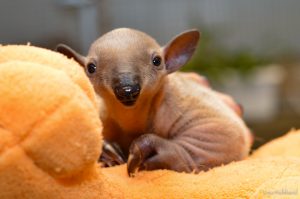 “We wanted to give the pup a Spanish name since Tamanduas are primarily from Spanish speaking countries and both of its parents have Spanish names. We chose the name Mani, which means “peanut,” because we were able to watch Mani grow from the size of a peanut via weekly ultrasounds on mom, Isla,” said Cincinnati Zoo Interpretive Animal Keeper Colleen Lawrence. “We fell in love with the pup when it was only a blip on a screen.”

Five-year-old Isla, a first-time mom, has taken care of the pup exactly the way she should, so it is healthy and growing fast.  Care team members think the baby is a boy, but it’s difficult to be 100% certain of the sex of tamanduas when they’re this young.

Mani can be seen clinging to Isla through the windows of the Zoo’s Animal Ambassador Center (AAC).

Also called the lesser anteater, the tamandua uses its long snout to sniff out ant, termite and bee colonies. Long claws enable it to dig into nests, and a long sticky tongue licks up the insects. A single tamandua can eat up to 9,000 ants in a single day!