Recently-hatched Guam rail chicks may be part of release program

CINCINNATI (August 21, 2018) –  Guam rails are extinct in their natural habitat, but there is still hope for the species. Two chicks that hatched earlier this month at the Cincinnati Zoo & Botanical Garden may play a part in bringing the wild population back!

“There’s a good chance that these chicks, if not placed back into the Guam Rail Species Survival Plan (SSP) breeding population, could be released on the island of Rota, just south of Guam, where efforts are being made to reintroduce the species. That decision will be made by the SSP program leader at a later date.”  said Jennifer Gainer, Cincinnati Zoo’s aviculture team leader.  “According to the most recent Guam Rail SSP Breeding and Transfer plan, 11 of the 42 rails that are in Association of Zoos and Aquariums (AZA) facilities within the country are recommended to be exported to Guam for eventual release.” 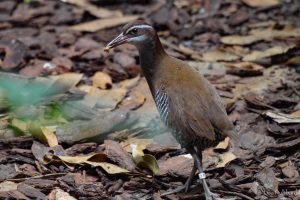 Only 154 Guam rails exist in the entire AZA population, which is managed by the SSP. The SSP started releasing birds on Rota in the 1990s but hasn’t quite established a fully self-sustaining wild population. Recent reports from the Guam Department of Agriculture, however, suggest that rails are beginning to flourish there on their own.

It’s still not possible for the birds to be reintroduced to their native Guam, but conservationists are working on it. There are an estimated 300,000 brown tree snakes on the island despite attempts to control the invasive species that wiped out the Guam rail and other indigenous bird species after it was inadvertently brought in with military supplies during World War II.  The flightless rails and their easily-accessible ground nests were easy prey for the snakes.  By 1987, the population that once included an estimated 10,000 birds was down to 21.  These remaining few were removed and brought into human care.  All the Guam rails on the planet today descended from these birds.

“The Cincinnati Zoo has a long history of working with Guam rails, but it’s been about 10 years since we had chicks. It’s the first time many of us have ever seen this kind of chick, so we’re pretty excited,” said Cincinnati Zoo Senior Aviculturist Cody Sowers. “Some members of our bird team have participated in conservation work on Guam and neighboring islands and would be thrilled if birds hatched here became part of the wild population there.”

Visitors can see the chicks and their parents in the Australasia habitat in the Wings of the World bird building. The secretive species is often hard to spot, but with chicks running around behind mom and dad it should be a little easier. Pro tip: Stand still and look at the ground.