CINCINNATI, OH (March 25, 2021) – A new member of the Wings of Wonder Bird Encounter, sponsored by Ameritas, hatched on March 12, 2021, at the Cincinnati Zoo & Botanical Garden.  The Verreaux’s eagle owl, also known as a milky eagle owl, is being hand raised by the bird team and has tripled its weight in just two weeks! 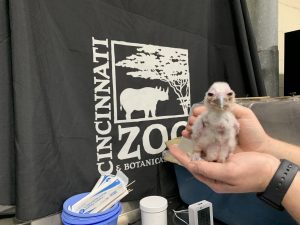 “Rapid growth is expected and normal for this species, which is the largest owl in Africa,” said Cincinnati Zoo’s curator of ambassador animals & outreach Meredith Hughes.  “It weighs 245 grams now and might be ten times that big in a couple of months.   If it’s a female, it could be even bigger!”

Since it’s March Madness time, the bird team decided to use a bracket-style system to pick a name for the chick. Each member of the bird team was given slots to fill with names they liked. Those became the Tweet 16. They then voted on each match up of names until one name came out on top. 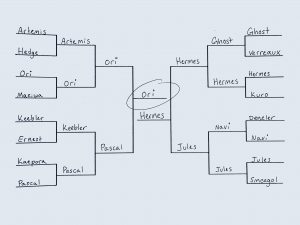 “‘Ori’ was selected because it simply sounds cool.  Naming birds is like naming a band or song. We look for something that is memorable, sounds cool and we can easily say to audiences thousands of times throughout the life of this bird,” said Cincinnati Zoo’s lead bird trainer Eddie Annal.   “Ori was added to the pool because it is the name of a video game that features owls. The name originates from Hebrew and means ‘light’.”

The species is named for Jules Verreaux, a well-known ornithologist and botanist in the 1800s. Like all owls, milky eagle owls have numerous adaptations for hunting. The legs are powerfully strong, with long, sharp talons on each toe. This power, combined with the major force of impact that owls can achieve, means that most prey of any size are killed instantly upon impact. The edges of each feather bear soft, hair-like textures that eliminate the distinctive flapping sound that we hear when most birds take off into flight or change direction suddenly.

Visitors can learn more about the species here and will be able to see Ori in the Bird Encounter sometime this summer.