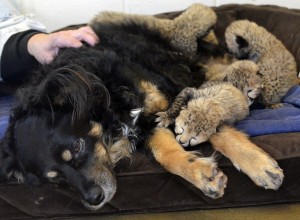 CINCINNATI, OH (March 22, 2016) – Willow, mother of the five cheetah cubs born via C-section at the Cincinnati Zoo & Botanical Garden’s Cheetah Breeding Facility on March 8, has passed away. Zoo vets were hopeful that the five-year-old cheetah would make a full recovery following surgery, but she remained lethargic and lost her appetite over the weekend.

Video of Blakely with cubs

“Cheetahs are a fragile species and this difficult birth proved to be too much for her to pull through” said Thane Maynard, Director of the Cincinnati Zoo & Botanical Garden.   “Willow was able to contribute to the survival of her species by producing five cheetah cubs.  Without the C-section, we likely would have lost both the mom and the cubs.”

The cubs have been receiving critical care in the Zoo’s nursery since they were born.  Nursery staff have been bottle-feeding the premature cubs every three hours and closely monitoring their weight.  Australian shepherd “Blakely,” the Zoo’s resident nursery companion and former nanny to several Zoo babies, has been called into action to provide snuggling, comfort and a body to climb. 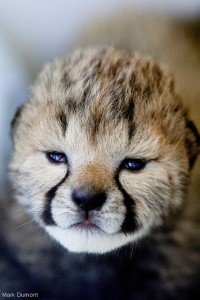 “They really turned a corner this weekend.  They opened their eyes, had good appetites and, most importantly, they pooped!” said Head Nursery Keeper Dawn Strasser of the cubs.  “It’s important to keep their digestive system moving.  We’ve been massaging their bellies and giving them opportunities to exercise as much as possible.”

Blakely will have his paws full with this assignment.  “His first job is to let the cubs climb on him, which they did as soon as they were put together.  They need the exercise to build muscle tone and get their guts moving,” said Strasser, who supervises daily climbing sessions and other interactions with Blakely.

As the cubs grow, Blakely’s role in their development will shift from climbable companion and hairy warm body to teacher and role model.  He taught his last student, a baby takin named Dale, to jump up on rocks and to keep his head butts in the gentle range. His first charge, a single cheetah cub named “Savanna,” learned the difference between a playful bite and the start of a fight from Blakely.

The cubs (3 boys and 2 girls) will remain in the nursery for at least 8-12 weeks.  After that, they will be hand-raised and trained to be cheetah ambassadors.  Visitors may be able to view the cubs through the nursery windows, but some feedings and exams will take place behind the scenes.