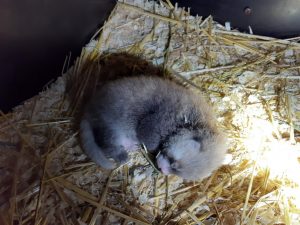 Baby a happy surprise after mom’s miscarriage in May

Scientists at Cincinnati Zoo & Botanical Garden’s Center for Conservation and Research of Endangered Wildlife (CREW) have devoted years to studying red panda reproduction and, in 2015, were the first to accurately predict birth dates for two cubs, born six days apart, using a combination of ultrasonography and hormone monitoring.  By performing regular ultrasounds on super mom Lin, they were able to detect that she was pregnant in April of this year, but sadly the pregnancy was lost in May.  Since red pandas are seasonal breeders, the team assumed that Lin would not be giving birth this year.  But, two weeks ago today, she did!

“To my knowledge, Lin is the first documented case of a red panda losing her pregnancy and then having another embryo come along and implant in the same year,” said Dr. Erin Curry, reproductive physiologist at Cincinnati Zoo’s CREW.  “When ultrasounds revealed that she lost the pregnancy in May, there was no historical reason to keep doing ultrasounds this season.”

Red pandas usually breed in late winter and give birth in the summer. So, unlike cows/ rhinos/ giraffes, which have estrous cycles year-round, red pandas have a much shorter window of fertility each year.  They are also induced ovulators, experience embryonic diapause/delayed implantation, and can have pseudopregnancies, so the fact that CREW has been able to predict actual birth dates in the past is remarkable.

The science has been so accurate, in fact, that when keepers noticed that Lin was gaining weight, they attributed it to other factors, such as her recent indulging on cicadas and mulberries.

Lin then surprised everyone when she and gave birth on July 16.  Mom and baby are doing great and spending most of their time in the nest box. They have access to the habitat, but the baby will most likely stay inside for at least two more months.

“The most interesting part of this second pregnancy is that we don’t know if she had another embryo hanging out in diapause that somehow received the cue to implant after the first one was lost OR if she possibly cycled back and bred again, although no breeding was observed”  said Dr. Curry.  “There is a possibility that this isn’t a total rarity; however, most zoos don’t perform regular ultrasounds on their pandas, so this has never been documented before. As a scientist, it’s exciting when we are challenged on what we think we know about the reproduction of a species.”

CREW and the red panda keepers have been performing ultrasounds on Lin for years.  She actually stands still during the procedure and is happy to eat her favorite snacks until the team is finished.

Red pandas are listed as Endangered on the IUCN Red List due to illegal trade and poaching, habitat loss and fragmentation; habitat degradation; and physical threats as well as natural disasters. The Cincinnati Zoo supports  the efforts of the Red Panda Network to protect red pandas and their bamboo forests in the wild through the education and empowerment of local communities.