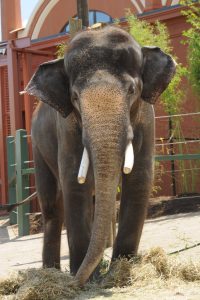 Three females to be paired with genetically valuable bull

A ten-thousand-pound bull elephant, Sabu [SAH-boo], was moved earlier today from Cincinnati Zoo & Botanical Garden to the Columbus Zoo and Aquarium, where he will be introduced to three breeding-age females.

“Sabu is one of the most genetically valuable males in the North American population of Asian elephants and has no living offspring,” said Cincinnati Zoo’s director of animal care, Christina Gorsuch.   “This move will triple his chances to contribute to the survival of this endangered species.”

Sabu will return to Cincinnati in 2024 prior to the opening of the new, five-acre Elephant Trek habitat.

“Our elephant team worked hard to prepare Sabu for this big move.  They trained him to walk into his transfer crate voluntarily, eliminating the need for anesthesia and minimizing stress on move day,” said Gorsuch.  “This is no small feat if you consider Sabu’s stature and cautious personality!”

Columbus will be Sabu’s fourth home since the 34-year-old elephant arrived in the United States in 1991.  He sired two calves, one at Dickerson Park Zoo in and one at the Cincinnati Zoo, but both died from a virus (Elephant Endotheliotropic Herpesvirus – EEHV) that is still a major threat to the North American elephant population.

“Collaboration between zoos is essential in order to ensure the long-term success of elephants in a managed population,” said Gorsuch. “We support each other’s programs for husbandry, training, medical emergencies and just general keeper education and professional development.”

Cincinnati Zoo has partnered with Columbus Zoo on many other Species Survival Plan® (SSP)-supported animal moves and, as the only two Ohio zoos in the Manatee Rescue & Rehabilitation Partnership (MRP), work closely with them to rehabilitate manatees and return them to Florida waters.

“We know that he’s in good hands and are glad that he’s just a short drive away,” said Gorsuch. “We look forward to his return and hope that he sires lots of calves in the coming years, in Columbus and here, to help contribute to the species’ survival.”

In addition to building a world-class home for elephants here in Cincinnati, the Cincinnati Zoo is committed to helping Asian elephants survive in their native habitats, working with the Asian Nature Conservation Foundation (ANCF) in India to reduce human-elephant conflict outside protected areas. The Zoo is also actively involved with the Asian Elephant SAFE (Save Animals From Extinction) Program (AeSP), initiated by the Association of Zoos and Aquariums (AZA), which has these primary goals:

Cincinnati Zoo is developing innovative projects to get more of its audiences involved in Asian elephant conservation.  There are also many ways to advance the Zoo’s mission to bring people “close enough to care” about this species, including making a http://support.cincinnatizoo.org/mh2r.