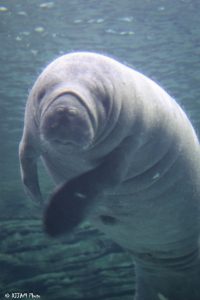 SeaWorld released a total of 4 manatees.  See the release below for details!

Multiple Facilities Come Together to Rehabilitate and Return Manatees

The goal with every rescue is to rehabilitate and return the animal as quickly as possible, but young manatee calves take additional time and resources. All four of these manatees were rescued at young ages and required extended rehabilitation and care. Rescued manatee calves must weigh at least 600 pounds before they are considered strong candidates for return by the FWC. As part of the Manatee Rescue and Rehabilitation Partnership (MRP) facilities are able to work together shifting rehab animals between facilities to ensure future rescues are not turned away.

Prior to all four returns, FWC recorded final measurements while Sea to Shore Alliance fitted each manatee with a belt that will allow them to monitor their success and track their migration in the wild.

As part of the Manatee Rescue & Rehabilitation Partnership (MRP), SeaWorld Orlando is an acute care rehabilitation facility that provides life-saving medical care to rescued manatees. At the time of his return

The MRP is a cooperative group of non-profit, private, state, and federal entities who work together to monitor the health and survival of rehabilitated and released manatees. Information about manatees currently being tracked is available at www.manateerescue.org. The Florida manatee was recently reclassified from endangered to threatened, but is still at risk from both natural and human causes of injury and mortality. Exposure to red tide, cold stress and disease are all natural problems that can affect manatees. Human-caused threats include boat strikes, crushing by floodgates or locks, and entanglement in or ingestion of fishing gear.

All manatee rescue footage is produced by SeaWorld under the FWS Permit Number MA770191.