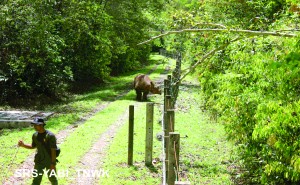 A report was released from Made Fera of the Sumatran Rhino Sanctuary (SRS) on Monday, January 11, with updates on Sumatran rhino Harapan (aka Harry) and his status at the SRS in Way Kambas National Park in Indonesia. In order to increase Harry’s quarantine space, the SRS staff made a special corridor in his brother Andatu’s enclosure for him. This corridor connects his quarantine stall with the breeding stall in the central area. This will not only give Harry more room to roam, but it will serve as a place for him to learn how to live in the forest. He’s already started to learn how to find living food and plants and how to live within a real forest. Fera said, “He was good, he was calm but sometimes very curious when something new happened like sound of gibbon’s sing, macaque, birds, winds, and every new things for him.” 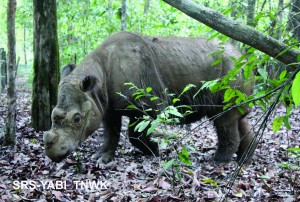 Harapan has been eating a normal amount and it’s reported that he likes to wallow for almost 4 hours a day! Regular health monitoring, such as daily physical checks, weekly fecal samplings, and monthly blood checkups, will continue to be conducted to make sure this “city rhino” is adjusting to his new life in the country. Fera concluded, “We hope that Harapan could become our new hope to leading the breeding programs in the SRS.” #HopeForHarry