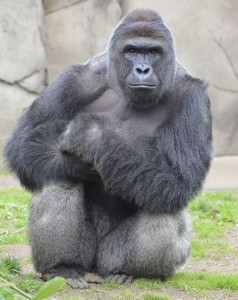 Harambe, large for his age at 419 pounds, will be placed in a social group with two 19-year-old females, “Chewie” and “Mara.” A typical gorilla group includes one silverback male and several females.  Harambe’s group does not have a breeding recommendation, so the three will be together for social interaction and companionship.  The other gorilla group includes 23-year-old “Jomo,” and females “Asha,” “Anju,” “Samantha,” ”M’linzi,” and youngsters “Gladys,” and “Mondika.”

“In the other gorillas’ eyes, Jomo is still the man and Harambe is yet to establish himself.  He’s a rookie silverback in camp for spring training,” said Ron Evans, Curator of Primates at the Cincinnati Zoo.  Subsets of these groups will be on exhibit in Gorilla World until introductions behind the scenes are complete.  After that, the two groups will rotate on and off exhibit.

“At 16, Harambe is a young silverback learning his role as a future leader.  He got too old to fit in at his natal institution and, like wild gorillas, had to leave the area to find his own way. Matching him up with the socially-savvy Chewie and Mara is a good step in his development. It’s important to have self-assured females as Harambe transitions from teenager to confident and well-balanced silverback.  He demonstrates intelligence and curiosity, using sticks and things to reach for items outside his grasp,” said Evans.

There are about 765 gorillas in zoos worldwide including approximately 360 in the AZA’s SSP.  Western lowland gorillas are critically endangered in the wild, with less than 175,000 individuals. Due primarily to habitat destruction caused by logging, mineral mining and agricultural expansion, wild gorilla numbers continue to shrink.  The bushmeat trade – the killing of wild animals to be used as human food – is also a major threat to the western lowland gorilla population throughout the Central African rainforests.  More than 1,000 gorillas are illegally poached for the bushmeat trade each year.

The Cincinnati Zoo supports wild gorilla conservation efforts like the Mbeli Bai Study and the Mondika Gorilla Tracking Study in Nouabalé-Ndoki National Park in the Republic of Congo.  The Mbeli Bai Study is the longest running research being done with wild western lowland gorillas. The research in Mondika allows for up close gorilla observation along with inspirational eco tourism opportunities. Through research, local education programs, publications and documentaries, the  Nouabalé-Ndoki Project is raising international awareness for gorillas and their struggle for survival.