This exhibition is organized by the National Geographic Society and Omaha’s Henry Doorly Zoo & Aquarium.

Photo Ark in the News: 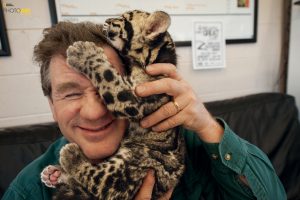 Sartore started the Photo Ark in his hometown of Lincoln, Nebraska. Since then, Sartore, a world-renowned photographer, has visited 40 countries in his quest to create this photo archive of global biodiversity. To date, Sartore has completed portraits of more than 6,000 species, photographed on either a plain black or white background. No matter its size, each animal is treated with the same amount of affection and respect. The results are portraits that are not just stunningly beautiful, but also intimate and moving. “It’s the eye contact that moves people,” Sartore says of the animals’ expressions. “It engages … feelings of compassion and a desire to help.” Learn more about the National Geographic Photo Ark. Sartore has written several books including RARE: Portraits of America’s Endangered Species, Photographing Your Family, Nebraska: Under a Big Red Sky and Let’s Be Reasonable. Two new National Geographic Photo Ark books, The Photo Ark and Animal Ark, will be on sale wherever books are sold this spring. National Geographic Photo Ark fans are also invited to join the conversation on social media with #SaveTogether and learn more about how to get involved with the project at NatGeoPhotoArk.org. In addition to the work he has done for National Geographic, Sartore has contributed to Audubon magazine, Time, Life, Newsweek, Sports Illustrated, and numerous book projects. Sartore and his work have been the subjects of several national broadcasts, including National Geographic’s Explorer, the NBC Nightly News, NPR’s Weekend Edition and an hour-long PBS documentary At Close Range. He is also a regular contributor on the CBS Sunday Morning show with Charles Osgood. Sartore graduated from the University of Nebraska with a degree in journalism. He currently lives in Nebraska with his wife and three children. Sartore and his images are represented by National Geographic’s internal talent and stock agency NatGeoCreative.

The National Geographic Photo Ark is an ambitious project committed to documenting every species in zoos—inspiring people not just to care, but also to help protect these animals for future generations. The National Geographic Photo Ark is a compelling and visually powerful project that aims to photograph species before it is too late. In addition to creating an archival record for generations to come, this project is a hopeful platform for conservation and shines a light on individuals and organizations working to preserve species around the world.

Featuring the work of National Geographic photographer and Fellow Joel Sartore, the exhibition will be on display until August 20. This exhibition is organized by the National Geographic Society and Omaha’s Henry Doorly Zoo & Aquarium. The completed National Geographic Photo Ark will include portraits of over 12,000 species representing several animal classes, including birds, fish, mammals, reptiles, amphibians and invertebrates. In what will be the largest single archive of studio-quality photographs of biodiversity ever, the National Geographic Photo Ark continues to move toward its goal of documenting these 12,000 species in zoos, thanks in part to Sartore’s enduring relationships with many of the world’s zoos and aquariums. These iconic portraits have captured the imagination of people around the world and have even been projected on the Empire State Building and St. Peter’s Basilica in Rome.

The “National Geographic Photo Ark” exhibition will highlight more than 50 of Sartore’s most compelling images and provide visitors with the unique opportunity to come face to face with animals from the National Geographic Photo Ark. Sartore has worked in more than 250 zoos, aquariums and animal rescue centers around the world. Many of the images featured were taken at the Cincinnati Zoo. Visitors will learn about the project, its mission and its conservation efforts by the Cincinnati Zoo. The exhibition will also engage audiences of all ages through free educational materials and activities.

About the National Geographic Photo Ark

The interaction between animals and their environments is the engine that keeps the planet healthy for all of us. But for many species, time is running out. When you remove one, it affects us all. The National Geographic Photo Ark is a multiyear effort to raise awareness of and find solutions to some of the most pressing issues affecting wildlife and their habitats. The Photo Ark’s three-pronged approach harnesses the power of National Geographic’s photography and the bold ideas of our explorers. Led by National Geographic photographer Joel Sartore, the project aims to document every species currently held in zoos, inspire action through education, and help save wildlife by supporting on-the-ground conservation efforts.

Joel Sartore started the Photo Ark in his hometown of Lincoln, Nebraska, over a decade ago. Since then, Sartore, a world-renowned photographer, has visited 40 countries in his quest to create a photo archive of global biodiversity, which will feature portraits of an estimated 12,000 species of birds, fish, mammals, reptiles, amphibians, and invertebrates. Once completed, the Photo Ark will serve as an important record of each animal’s existence and a powerful testament to the importance of saving them. To date, Joel has completed portraits of more than 6,000 species. No matter its size, each animal is treated with the same amount of affection and respect. The results are portraits that are not just stunningly beautiful, but intimate and moving. “It’s the eye contact that moves people,” Sartore explains. “It engages their feelings of compassion and a desire to help.”

The National Geographic Photo Ark is a powerful tool to teach people of all ages about our planet’s amazing biodiversity and foster a real connection to Earth’s wildlife. The project engages students in the classroom through free educational materials and activities, and inspires the public through special exhibitions, books, TV specials, features in National Geographic magazine, and events around the world. An interactive digital experience allows people to engage with Photo Ark content on our website, explore animals in the collection, and share information about endangered species with their social networks.

National Geographic is working to help save species that are featured in the Photo Ark and nearing extinction. Building on National Geographic’s 129-year history of investing in bold people and transformative ideas, the Photo Ark supports innovative, on-the-ground conservation projects designed to reduce human threats to wildlife, protect critical habitats, and create lasting change. Learn more at NatGeoPhotoArk.org. See What We Can #SaveTogether. Join us, and help make a difference by sharing, supporting, and saving. Donate at NatGeoPhotoArk.org.

Try out some fun & interactive ways to discover the Photo Ark exhibition!

Walk around the Zoo and look for animals featured in the Photo Ark display that match the description in the squares below. When you find a match, write or draw that animal in that square. Click here for the game.