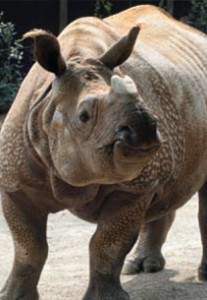 The IRF’s vision is a world where rhinos thrive in the wild.  The IRF achieves is vision by ensuring the survival of rhinos through strategic partnerships, targeted protection, and scientifically sound interventions.  CREW scientist, Dr. Terri Roth, serves as the Vice President for Asia Programs on the Board of the IRF. Through the IRF, CREW supports the protection of wild Sumatran rhinos on the island of Sumatra and the expansion of the greater one-horned rhino population via translocation to additional wildlife parks in Assam, India.

The Rhino TAG of the Association of Zoos and Aquariums is an integral partner of CREW’s. Through the Rhino TAG, CREW scientists learn which male rhinos are the most valuable and bank sperm from these males. The Rhino TAG also identifies the most appropriate genetic matches for breeding. Based on these recommendations, CREW scientists choose sperm samples for artificial insemination that will produce the most genetically valuable calves. CREW scientists serve on the Rhino TAG’s Research Council which prioritizes studies needed to improve the conservation, health and welfare of all rhino species.

YABI, the rhino foundation of Indonesia oversees the management of the Sumatran Rhino Sanctuary on Sumatra, currently the only breeding program for this species.  Andalas and Harapan, two male calves produced at the Cincinnati Zoo, were sent to the sanctuary in 2007 and 2015 to breed with the female rhinos. CREW scientists worked closely with the sanctuary staff who succeeded in 2012 and 2016, producing two calves sired by Andalas.