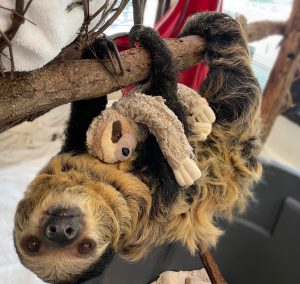 Guessing is now closed.  Baby birth info and winner’s name will be posted here after the baby is born!

Funds raised will be used to care for our sloths and to support our partners at The Sloth Institute in Costa Rica.

Sloths eat, sleep, mate, and even give birth from a hanging position. The youngster must grab onto its mother’s hair at birth and find its way to her nipples to nurse. The baby begins sampling solid foods at about 10 days but still nurses for about a month. After that, the youngster continues to cling to its mother’s belly but eats whatever she eats. It first hangs upside down on its own at 20 to 25 days old. 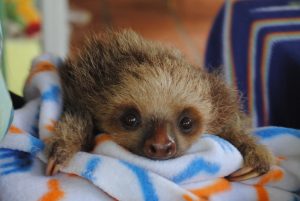 The Zoo partners with The Sloth Institute Costa Rica (TSI) to study as well as rescue, rehabilitate and release sloths in the Manuel Antonio area of Costa Rica.  Established in 2014, TSI has successfully released both Hoffman’s Two-toed (Choloepus hoffmanni) and Brown-throated Three-toed Sloths (Bradypus variegates) that had been orphaned and hand-raised.  Sloths face an ever-increasing threat from human encroachment.  They are often struck by cars when crossing roads that bisect the forest, attacked by feral dogs, electrocuted by un-insulated electrical wires, or lose the trees they live in and eat due to deforestation.

The ecology of sloths still holds many mysteries.  TSI fits each released sloth with a tracking collar and also places these collars on wild sloths.  This allows the researchers to monitor and collect data on both the released and wild sloths with the goal of contributing more detailed knowledge to the scientific community in order to help preserve these unusual species.

*Zoom tour to be scheduled for a date/time that’s mutually agreed upon and could be rescheduled at the discretion of either party. Alternate method of entry available.  A minimum donation of $5.00 is requested. Free entries defeat the charitable fundraising purpose of this event and are not encouraged. However, Mail in requests for alternate method of entry can be obtained by mail to the Cincinnati Zoo & Botanical Garden Events Department 3400 Vine Street, Cincinnati, OH 45220. All requests must be received before the baby is born or 11:59pm on September 30, 2021, whichever comes first.  All event admission sales are final. No refunds are available except in the exclusive discretion of the Zoo. Void where prohibited. The chances of winning are based upon the actual number of entries received. 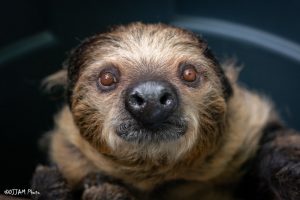