The Cincinnati Zoo is one of two U.S. Zoos outside of Florida that participate in the U.S. Fish and Wildlife Service’s (USFWS) Manatee Rescue & Rehabilitation Partnership. The goal of the program is to rescue and treat sick, injured and orphaned manatees and then release them back into the wild.

The endangered Florida manatee is at risk from both natural and man-made causes of injury and mortality. Exposure to red tide, cold stress, and disease are all natural problems that can affect manatees. Human-caused threats include boat strikes, crushing by flood gates or locks, and entanglement in or ingestion of fishing gear.

Manatees that are rescued are initially housed and cared for at one of three main rehabilitation facilities in Florida—SeaWorld, Miami Seaquarium and Lowry Park Zoo. Some animals only require short-term care and then are released back into the wild. Those animals that call for long-term rehabilitation are sent to other facilities for care, including the Cincinnati Zoo. Since 1999, the Cincinnati Zoo has rehabilitated 19 manatees, and more than a dozen of those have been released back into the wild.

Each manatee that returns to the wild is fitted with a satellite transmitter around the base of its tail. The Manatee Rescue & Rehabilitation Partnership, a cooperative group of non-profit, private, state, and federal entities monitor the health and survival of the manatees until their releases are considered successful. Information about manatees currently being tracked is available at www.ManateeRescue.org. 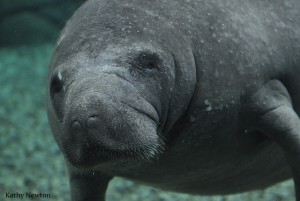