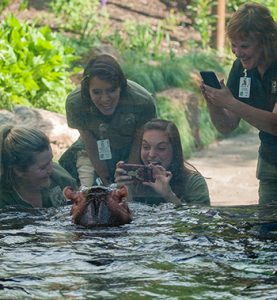 Fiona is exploring the outdoor habitat after hours

CINCINNATI, OH (May 31, 2017) – Fiona, Cincinnati Zoo & Botanical Garden’s famous four-month-old hippo calf, has started to explore the outdoor habitat at Hippo Cove after hours.  She is not yet ready for her public debut but getting comfortable in the outdoor environment is a step in the right direction.

“There’s a lot to get used to in the great outdoors,” said Christina Gorsuch, curator of mammals at the Cincinnati Zoo. “She has to learn that sand is not food and that you can see faces on the other side of a strange, hard surface that you can’t get through (glass).”

Zoo employees have been happy to help Fiona learn. They have been standing on the other side of the glass during after-hour pool sessions that last about an hour.  “Fiona can only handle short visits outside right now.  She’s doing great navigating in the 9-ft-deep pool, but it takes a lot of energy to propel herself from the bottom to the surface (to breathe) over and over again,” said Gorsuch.

Members of Fiona’s care team swim with her to make sure she isn’t struggling and to keep her company.  Under normal circumstances, she would be with her parents or a larger bloat. Since she was born six weeks premature and was unable to stand to nurse, human caregivers had to step in to take care of her.  For now, they are her bloat.

“Introductions to her parents are going well, but we have to take things slowly because of Fiona’s size,” said Gorsuch.  “Bibi and Henry each weigh more than 3,000 pounds, and Fiona is at about 275 today.  She’s a tough little hippo, but she needs to be able to handle an accidental flick of the head from the adults.”