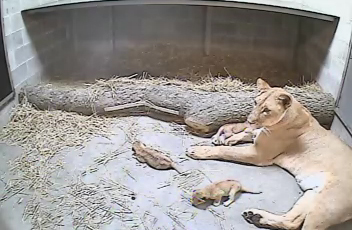 First lion cubs born at the Cincinnati Zoo since 2001

CINCINNATI – November 14, 2014  – African lion “Imani,” who has been on 24-hour baby watch since Saturday, gave birth to three cubs late yesterday. The first cub, who was in breech position, emerged at 3:33 p.m. Two hours later, a second cub was born and number three arrived shortly after.  Imani, a first-time mom, cleaned the cubs, allowed them to crawl all over her and assumed the optimal position to allow them to nurse.

“Mom and cubs appear to be doing well this morning.  Imani, for a first time mom, is doing all the right things.  The cubs are active and alert and everything is moving in a positive direction.” said Bob Lessnau, Cincinnati Zoo’s Director of Animal Collections.

Imani showed signs of being pregnant in the weeks prior to giving birth and hormone tests indicated a pregnancy, but keepers and scientists at the Zoo’s Center for Conservation and Research of Endangered Wildlife (CREW) could not be 100% positive that she was pregnant until cubs were born.  Now it’s official!  See related blog posts.

Three-year-old Imani was born at the St. Louis Zoo and came to the Cincinnati Zoo as the result of a breeding recommendation from the Association of Zoos & Aquariums (AZA) Lion Species Survival Program (SSP).  She was introduced to the Zoo’s male lion, four-year-old John, earlier this year and they have been excellent companions.

“It’s been nearly 15 years since we’ve seen African lion cubs at the Cincinnati Zoo. We couldn’t be happier to have cubs so soon after John and Imani were put together,” said Thane Maynard, Executive Director of the Cincinnati Zoo.

In the wild, a lion mother would keep her cubs secluded in a sheltered location.  Similarly, Imani will stay with her cubs in a den area for the next few months. The timeline for reuniting John with the pride depends on a number of factors.  Keepers will monitor the behavior of the inexperienced parents to determine when introductions will take place.

The gestation period for lions averages three to four months, and litter size is usually two to six cubs. Born blind and dependent on their mothers for care and protection, lion cubs usually stay with their mothers for about 18 months. Visitors will get to see them in a few months when temperatures allow.

Lions are considered vulnerable by the International Union for Conservation of Nature as the result of climate change, hunting and habitat loss. Following a review of the best available scientific information, on October 27, 2014, the U.S. Fish and Wildlife Service proposed listing the African lion as threatened under the Endangered Species Act (ESA). The agency’s analysis found that lions are in danger of extinction in the foreseeable future.

Look for updates on the cubs from @CincyZooLion, @CincinnatiZoo and on the Zoo’s Facebook page. #CZBGLionCubs.

Got Names? Once the gender of the cubs is determined, the Zoo will ask for name suggestions.