Seyia and Faru – A match made by… the SSP! 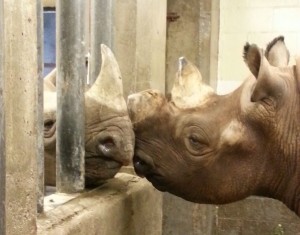 got a potential mate. The Association of Zoo and Aquarium’s (AZA) Species Survival Plan (SSP) has determined that these two rhinos are a good genetic match and has recommended that they breed.

For the past few weeks, Seyia and Faru have been getting to know each other behind the scenes where they can see, hear and engage nose to nose.  Keepers are working with reproductive experts from the Zoo’s Center for Conservation and Research of Endangered Wildlife (CREW) to monitor Seyia’s hormone levels to determine the optimal time to put them together to breed.

“Black rhinos are typically solitary animals, so they will most likely live in separate enclosures when they’re not together for breeding.  There are exceptions, and if we see behavior that indicates that they’re compatible yard mates, they may spend more of their time together,” said head keeper Randy Pairan. For now, the two will take turns going out in the Veldt exhibit, one in the morning and the other in the afternoon.  Visitors can identify Faru by his large size and the unique shape of his horn, which had to be repaired because of an expanding crack. 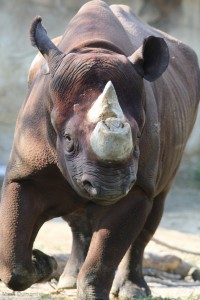 Faru was born at the San Antonio Zoological Gardens & Aquarium in 2004.  He moved to Atlanta in April 2011 where he sired one calf. Seyia, who will turn six later this month, moved from Baton Rouge, Louisiana, to Cincinnati in 2013.

The black rhinoceros (Diceros bicornis) is native to the eastern and central areas of Africa, including Kenya, Tanzania, and Zimbabwe.  They eat mostly leafy plants, branches, shoots, thorny wood bushes, and fruit. Black rhinos also have two large horns made of keratin that they use for defense, intimidation, and feeding. An adult can weigh anywhere between 1,760 and 3,080 pounds, and newborns (calves) weigh between  73 – 121 pounds. Black rhinos breed year-round and have a gestation period that lasts 15 months. They are one of the oldest known species of mammals.

The black rhinoceros is critically endangered with more than 115 individuals being managed by the SSP.  As recently as 1970, an estimated 65,000 black rhinos could be found throughout sub-Saharan Africa. However, between 1970 and 1992, 96-percent of Africa’s remaining black rhinos were killed in a wave of poaching due to the value of their horns. Heightened conservation efforts following the poaching increase led the black rhino population to grow from 2,410 in 1995 to a current total of 4,848. Today, black rhinos live in protected parks located in Zimbabwe, South Africa, Kenya, Namibia, and Tanzania. Poaching is still a serious problem, threatening to wipe out decades of conservation efforts. Even protected parks experience poaching breeches, which means the amount of safe land available to black rhinos is diminishing.

CREW is doing reproductive research on Faru and Seyia as part of an ongoing effort to save the black rhinos. All five species of rhinoceros—White, Black, Indian, Sumatran, and Javan—are perilously close to extinction in the wild.

« Zoofari 2015: A Celebration of 140 Years
Sumatran Rhino in Indonesia is Pregnant! Rhino born at the Cincinnati Zoo is the Father »