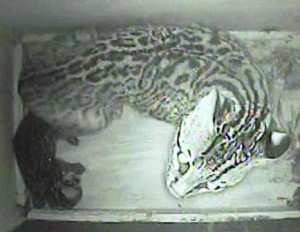 The mother, “Sala” was inseminated in both oviducts using a new laparoscopic approach developed by scientists from CREW.  Pregnancy was diagnosed at 60 days post-AI and the female gave birth naturally to a single kitten 23 days later.  This birth represents the fifth pregnancy worldwide in ocelots resulting from AI and only the second produced by CREW scientists using this new laparoscopic oviductal AI method.

Both Sala and the kitten are currently being housed in a quiet off-exhibit location but likely will be transferred to the ocelot exhibit in the Zoo’s Night Hunters building later this spring for public viewing.

Sala, an 8-year old, first-time mother, is the offspring of a founder pair imported to the US from Brazil in 1999.  The 14 year old, first-time father, Monsieur, is the offspring of another Brazilian founder pair imported to Canada in 1997.  At the recommendation of the Ocelot Species Survival Plan (SSP), the male was transferred from the Granby Zoo to the Cincinnati Zoo in 2008 for pairing but behavioral incompatibilities prevented the cats from breeding naturally.

« Woodstock in Cincinnati!
Bleed for a Cause – Save Lives & Help the Zoo »