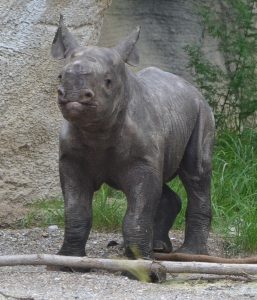 “Kendi is a brave little guy and would probably run all over the yard if his mom would let him,” said Cincinnati Zoo’s senior Veldt keeper Marjorie Barthel.  “She’s a first-time mom and is being protective.  They have access to go outside and do walk out occasionally, but it will take time for mom to feel comfortable enough to let Kendi explore the entire outdoor space.”

According to Barthel, mom and baby take naps and nurse inside. “Kendi is starting to mouth solid foods, so we’re cutting everything we give to Seyia into pieces small enough for the calf to handle.  He also likes to play in the water trough.  We can’t wait to see him discover mud.”

Kendi is only the fifth eastern black rhino born in the last two years in North America, and the first to be born at the Cincinnati Zoo since 1999. There are fewer than 60 of his species in the entire North American Zoo population.

Eastern black rhinos, native to Eastern and Central Africa, have two large horns made of keratin that they use for defense, intimidation, and feeding. An adult can weigh anywhere between 1,760 and 3,080 pounds, and newborns (calves) weigh between 73 – 121 pounds. The species is Critically Endangered due to poaching and habitat loss.  Fewer than 5,000 black rhinos remain in the world.

Dad, Faru, is out daily in his neighboring yard. Black rhinos are solitary animals, so there are no plans to unite the three.  Look for updates on the calf’s progress on CincinnatiZoo.org and on Facebook, Instagram, Twitter and Snapchat.