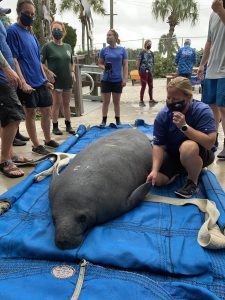 CINCINNATI (February 16, 2021) –Truffleshuffle, the 20th manatee to be rehabilitated at the Cincinnati Zoo & Botanical Garden in the 20 years that it has participated in the U.S. Fish & Wildlife Service’s Manatee Rescue & Rehabilitation Partnership (MRP), was released near Apollo Beach in the Tampa Bay area yesterday morning. The young male, and another resident of the Zoo’s Manatee Springs, returned to Florida in September 2020 and has been re-acclimating at SeaWorld Orlando since then.

“Our team was honored to be a part of Truffleshuffle’s journey. Rehabilitating Florida Manatees is important conservation work that happens right here in Avondale,” said Cincinnati Zoo manatee curator Winton Ray. “The goal of the MRP program is to rescue, rehabilitate, and release manatees.  We cared for Truffleshuffle for a year to get him ready for this moment, and it’s a joyous occasion.” 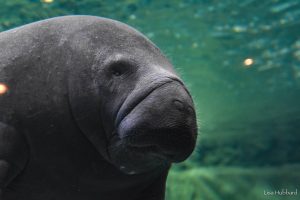 Cincinnati Zoo is one of two facilities outside of Florida that provides non-critical care for manatees.  Its manatee habitat has been without manatees for the past several months, so the pool and building could be renovated, but is now ready to receive manatees.  SeaWorld Orlando is currently overflowing with rescued manatees, so Manatee Springs may welcome new residents soon.

“Providing second-stage care opens up valuable space at critical care facilities like Sea World Orlando and gives our guests the opportunity to learn about these remarkable animals and the collaborative effort to rescue and rehabilitate them,” said Ray.