The Cincinnati Zoo & Botanical Garden has partnered with the US Fish & Wildlife service and the Fernald Nature Preserve in rearing and releasing critically endangered American Burying Beetles (Nicrophorus americanus) or ABBs.  Since 2013, CZBG has released adult ABBs every spring, returning later to check for larvae and adult beetles.  The first few years, while prolific in rearing ABBs on zoo grounds, did not seem to result in any adult ABBs at Fernald. After meeting in early Spring 2016, it was decided to release pairs of ABBs later in the year, resulting in the first ever adult ABBs found at Fernald in the current 5-year reintroduction cycle! 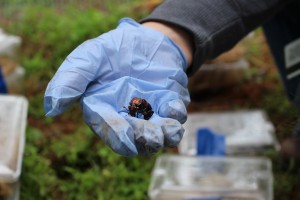 The American burying beetle (ABB) once ranged throughout the Central and Eastern United States as well as the Canadian provinces of Ontario, Quebec and Nova Scotia. ABBs now inhabit only 10% of their historic range. The reasons for their decline include habitat degradation, the extinction of the passenger pigeon and increased competition for prey from mammalian scavengers. In 1986, the IUCN designated ABBs as endangered and a short time later the U.S. Fish and Wildlife Service initiated a project to save the species from extinction. The idea was to collect a limited number of beetles from the wild, establish a population in zoos and eventually reintroduce ABBs to their former habitats. 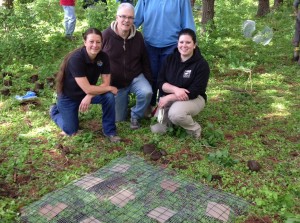 The Cincinnati Zoo first acquired ABBs in April of 1991 and established a successful breeding program. The Association of Zoos & Aquariums (AZA) recognized the success of that program with a Significant Achievement award in 1993. A short time later, with no immediate plans for reintroduction, the Zoo’s participation in the project waned. By the later part of the last decade, the project had found its wings and taken off; a number of zoos and universities were rearing ABBs and reintroductions were taking place at several locations. The AZA had developed a Species Survival Plan for ABBs and the project’s profile had grown with both local and national media outlets covering releases.

The Zoo reacquired ABBs in 2009 and began the search for a nearby site where we could release our zoo-reared beetles. In 2010, we zeroed in on the Fernald Preserve in Harrison, Ohio.

As the site of the former Fernald Feed Materials Production Center, the location had some dubious history; opening in 1951, it had been a Cold-War era uranium processing facility and, in 1984, it was discovered that the plant was contaminating the surrounding area. The plant ceased operations in 1989 and, in 199,2 a Superfund cleanup of the site began. As part of the cleanup, thousands of tons of contaminated concrete, sludge, liquid waste and soil were removed from the area and properly disposed of. The environmental cleanup and ecological restoration was completed in 2006 at a cost of $4.4 billion and the Fernald Preserve was born. No longer a toxic casualty of the nuclear industry, the site has been transformed into something natural with prairies, forests and one of Ohio’s largest man-made wetlands. Hopefully in the future, the preserve will also be home to a thriving population of ABBs.

The May 2013 release was just the first step in a 5-year reintroduction plan. We hope to release more than 1,000 beetles at the preserve over the next four years and will frequently survey the site to determine the viability of the population.

We are working closely with a number of entities on this project, including the U. S. Fish and Wildlife Service, the Ohio Division of Natural Resources, the Department of Energy, the AZA, the Wilds and Ohio State University. The Zoo’s work on the project has been led by insect keeper Mandy Pritchard, who has been aided by her fellow keepers and some invaluable volunteers. Former insect keepers Milan Busching, Randy Morgan, Karen Schmidt and current reptile keeper, John Staubach, also contributed to the efforts during their time here.

Help Save Burying Beetles with a Behind-the-scenes Tour

Get up close and personal with some of our residents in the World of Insects building. Book a Bug’s Life behind-the-scenes experience! Proceeds from your experience will fund conservation work in the field.