One of the world’s smallest cats, the black-footed cat is found only in the southern African countries of Botswana, Namibia and South Africa. It lives in dry, open habitats such as desert, savanna and scrubland. Due to its extremely shy and evasive nature, little is known regarding the black-footed cat’s status in the wild, though it is considered to be the rarest cat in Africa.

The black-footed cat is one of the five small cat species with which the Zoo’s Center for Conservation and Research of Endangered Wildlife (CREW) works on its Small Cat Signature Project. In addition to conducting zoo-based research on the reproductive biology of the black-footed cat, the Zoo also supports field research in South Africa. 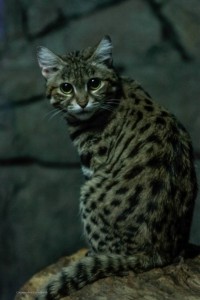 The Zoo supports field research on black-footed cats. Since 2004, a group of scientists and veterinarians working together as the Black-Footed Cat Working Group (BFCWG) have been studying black-footed cats in South Africa. The BFCWG aims to conserve this rare cat species by furthering awareness and conducting multidisciplinary research on the species’ biology, 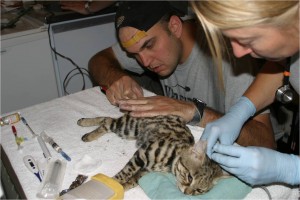 distribution, ecology, health, and reproduction over an extended period.

Once a cat is taken in, researchers take a variety of measurements and samples are taken and fit a radio collar. Over time, this generates valuable data regarding the behavior, ecology, genetics, and health of the wild black-footed cat population. Additionally, sperm collected from wild males can be imported into the United States (once frozen) and used to artificially inseminate females in zoos to infuse genetic diversity into the zoo population.