The Zoo supports the Bird Endowment’s Nino Adoptivo Saving the Blues program to enhance the reproduction of blue-throated macaws in the wild in Bolivia.

The critically endangered blue-throated macaw (Ara glaucogularis) is only known to survive on private ranches in one small region of northern Bolivia known as Los Llanos de Moxos with a population estimated at less than 130 individuals. It relies on cavities in palm trees as nest sites, but often loses out on nest sites due to competition from other macaws, toucans, bats and large woodpeckers. Their mission is to increase the wild population and well-being of the critically endangered Blue-throated Macaw Ara glaucogularis, in accordance with the species recovery plan, by supporting and developing efforts to: 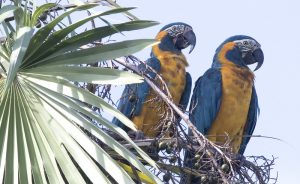 The goal of the Nido Adoptivo™ (“Nest Adoption”) Program is to increase the annual reproductive output of blue-throated macaws by providing nest boxes. The first nest boxes were installed in 2007, and more have been added over the past nine years to total 68 nest boxes in 2015-2016 season. Nest boxes are monitored twice a month by a field biologist who records the nest box contents, usage and inter-species interactions.

Follow the project on: The Bird Endowment’s Nido Adoptivo™ page.