The Pallas’s cat, also called manul, can be found across central Asia and as far west as Iran. These interesting small cats are very particular about their habitat, resulting in an incredibly fragmented population, which makes them hard to study. It is believed that they prefer a mix of grassland and shrub steppe with rocky cover, ravines and hill-slopes–areas that provide good coverage and a lot of space to hunt and roam. Pallas’s cats are often preyed upon by larger animals and depend on marmot burrows and rock cavities to protect themselves and raise their young.

The Pallas’s cat is one of the five small cat species with which the Zoo’s Center for Conservation and Research of Endangered Wildlife (CREW) works on its Small Cat Signature Project. In addition to conducting zoo-based research on the reproductive biology of the Pallas’s cat, the Zoo also supports efforts to protect the species in the wild. 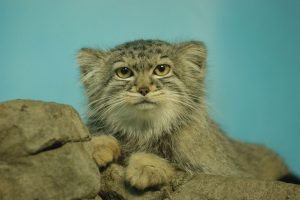 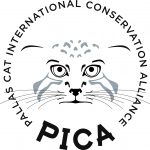 Formed in 2016, the Pallas’s Cat International Conservation Alliance (PICA) brings together field researchers, conservation organizations, zoological institutions and conservation specialists to improve our understanding of the species and enhance global conservation efforts. They aim to enhance monitoring techniques and gather data on the distribution of Pallas’s cats in the wild, increase knowledge on the species’ basic ecology, create a targeted conservation plan, and raise awareness.

For future study, the research team hopes to focus their attention on smaller areas and determine a better estimate of species density. They also hope to increase involvement of local researchers as key investigators. The work they do can help inform conservationists on how to approach plans to support the Pallas’s cat.