One of the largest and most brilliantly colored macaws, the scarlet macaw inhabits the tropical forests of Central and South America. Despite its large range, scarlet macaw populations in Central America suffer greatly. The scarlet macaw is an endangered species, with only 300-400 individuals estimated to survive in the wild in Guatemala, Mexico and Belize. They are victims of habitat loss, wildfires and the illegal wildlife trade, where they are highly sought-after for their brilliant plumage.

The Zoo supports scarlet macaw conservation in Guatemala through the Wildlife Rescue and Conservation Centre (ARCAS). 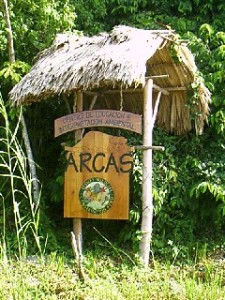 ARCAS collaborates with other organizations to ensure the survival of the scarlet macaw within the Mayan Biosphere Reserve. In addition to rescue and rehabilitation of wildlife, ARCAS also conducts environmental education activities as well as breeds scarlet macaws with the aim of reintroducing them to bolster the wild population, which is estimated at fewer than 150 scarlet macaws in Guatemala. 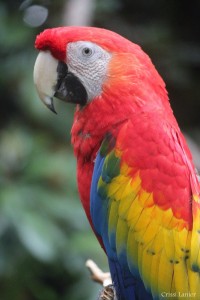 ARCAS carried out the first-ever release of endangered scarlet macaws (Ara macao cyanoptera) in Guatemala on October 5th, 2015. Nine individuals were released in the Sierra Lacandon National Park in the Maya Biosphere Reserve in the northern Peten region of the country with the objective of reinforcing the local macaw population there. Five of the macaws were fitted with satellite transmitters in order to monitor their movements and success in adapting to the wild.

These nine macaws were graduates of ARCAS´s breeding program, initiated in 2004 utilizing birds confiscated in the illegal pet trade. They are the result of years of hard work in the different stages of the program, including determining the genetic origin of the founder animals, developing successful breeding methodologies and elaborating rehabilitation protocols. Laboratory exams were carried out to confirm the health of the birds and prevent the spread of illnesses into wild populations. In this program, the chicks are raised by their parents so they are less likely to become imprinted on humans and will have a better chance at surviving in the wild. They are fed wild food so that they know what to eat once they are released. Funds were raised for the necessary equipment for the monitoring of released birds, and an environmental education program was established in order to gain the support of local communities in the release site. 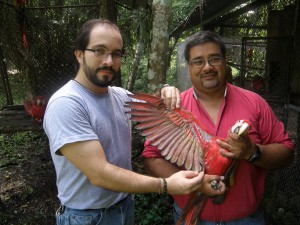 Funds supplied by the Zoo have been also used to construct an incubation house for chicks requiring special care and new flight cages that enable the fledgling birds to fly and strengthen their muscles in preparation for their eventual release into the wild. The Zoo also funds field trips for local students to visit the ARCAS center and learn about the scarlet macaw program.