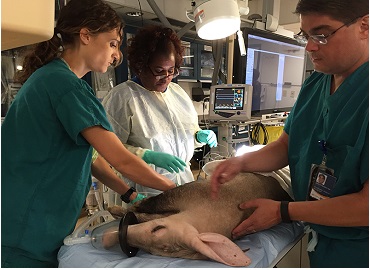 Radiographs of her head taken at the Zoo’s hospital in early June showed signs of lysis, or breakdown of the bone, just below her right eye. Zoo veterinarians were able to rule out some possible causes for Ali’s symptoms and administered several therapy treatments that produced little or no improvement in her condition. 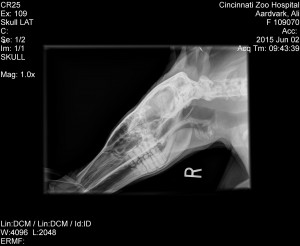 The Cincinnati Zoo determined that a more in-depth look at the areas surrounding her eye was necessary to determine the source of the drainage, extent of the bone damage, and to establish the best treatment plan moving forward.

The Zoo asked next-door neighbor Cincinnati Children’s to help with the 110-pound aardvark’s diagnosis, and, intrigued by the unusual request, the hospital agreed. Ali was anesthetized by Zoo vets who then transported her to Cincinnati Children’s, where they were met by a team of radiologists ready to perform scans in an area of the hospital separate from where human patients are treated. 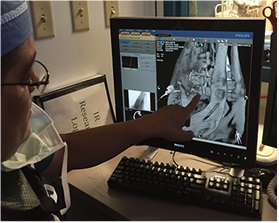 “After injecting contrast material into a small cavity below Ali’s eye, a pocket of infection, or abscess, around the root of one of Ali’s upper right teeth became more visible,” said Dr. John Racadio, Chief of Interventional Radiology at Cincinnati Children’s. “Both the CT and MRI scans revealed a chronic inflammatory process associated with the back two upper molars and an accompanying destruction of bone in that area.”

Zoo vets and Cincinnati Children’s radiologists reviewed the scans and identified a tooth infection as the source of Ali’s problem.  The Zoo is grateful to its good neighbor for providing the personnel, time and equipment that produced a concrete diagnosis for Ali. Thanks to the collaborative effort between neighboring institutions, the Zoo can move forward with a treatment plan for Ali that specifically addresses the underlying infection.