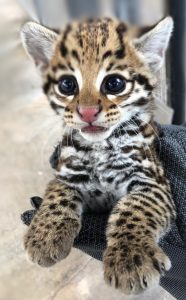 CINCINNATI (April 25, 2019) – Scientists at the Cincinnati Zoo & Botanical Garden’s Center for Conservation and Research of Endangered Wildlife (CREW), working in collaboration with colleagues at the Arizona Sonora Desert Museum and the El Paso Zoo, have produced two litters of ocelot kittens following artificial insemination (AI) with frozen semen. The first (and last) ocelot born following AI with frozen semen was born in 1995.

A total of five kittens were born on March 1st and 2nd, with three of the kittens surviving and currently being raised by their mothers at the respective zoological facilities. The kittens’ father was moved from Brazil in 2006 to the Cleveland Metroparks Zoo where his semen was collected and frozen nine years ago. This male, now 16 years of age and living at the Houston Zoo, has no other offspring and is considered the most genetically-valuable male ocelot in any North American zoo. 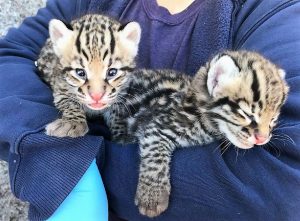 These AI births represent the culmination of 25 years of research by CREW’s Director of Animal Research, Dr. Bill Swanson, who produced the first ocelot kitten from AI with frozen semen at the Dallas Zoo decades ago. Since then, CREW has improved its AI strategies for felids by modifying protocols for semen cryopreservation, ovarian synchronization and laparoscopic insemination. For the last four years, these research efforts have been supported by a Collection Stewardship grant from the federal Institute of Museum and Library Services.

For the two AI pregnancies, the female ocelots were treated with oral progesterone for 30 days to suppress ovarian activity prior to two gonadotropin injections to induce follicular growth and ovulation precisely for a ‘fixed-time’ AI procedure. For AI, the females were anesthetized and inseminated laparoscopically into each oviduct with frozen-thawed semen (~2 million motile sperm/oviduct) during procedures performed at each zoo over two consecutive days in December 2018. Dr. Swanson conducted the laparoscopic oviductal AI procedures with the assistance of CREW Post-Doctoral Scientist Dr. Raquel Gonzalez and each of the collaborating zoos’ veterinary and animal care teams.
At ~50 days after AI, fecal progesterone analysis was used to confirm pregnancy and both females subsequently gave birth 82 days post-AI to one kitten (a female) at the ASDM and four kittens (with one male and one female surviving) at the El Paso Zoo. The kittens’ sire is a genetic founder for the small Brazilian ocelot population, consisting of just 37 cats, managed by the Ocelot Species Survival Plan (SSP) in North American zoos. Dr. Swanson serves as the coordinator of the Ocelot SSP on behalf of the Association of Zoos and Aquariums.

Ocelots have been included on the U.S. endangered species list for more than 40 years, and a small population of 60-80 wild ocelots still survives in South Texas. Small sized cats, including the ocelot, have received relatively little attention compared to larger cat species, with limited information available on their ecology or conservation status in the wild. Population projections indicate that several small cat species, including the ocelot, will see their genetic diversity substantially reduced in zoos over the next 50 years. Reproductive sciences, including techniques such as artificial insemination and semen cryopreservation, are playing a key role in helping to address the conservation and management challenges associated with maintaining these small cat species within zoos, and possibly in the wild in future years.