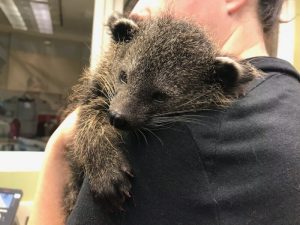 Go Bearcats! The Cincinnati Zoo & Botanical Garden and representatives from neighboring University of Cincinnati Department of Athletics welcomed a one-month-old female baby bearcat this morning outside its new home in the Zoo’s Animal Ambassador Center (AAC).  The future UC live mascot, born at the Nashville Zoo, arrived in Cincinnati on Tuesday and has been settling in and getting to know her caregivers.  Starting today, visitors will be able to see her!

“Our students and fans loved Lucy and were sad to see her retire from being the school’s live mascot earlier this year,” said Director of Athletics, Mike Bohn.  “We’re thrilled that the Association of Zoos and Aquariums was able to identify a young bearcat from the Zoo population that is well suited to continue the live mascot program that UC and the Zoo started 35 years ago.”

UC and the Zoo are asking for name suggestions for the new bearcat.  Submissions will be accepted via Twitter, Instagram and Facebook through October 31 (use #namethebearcat). The bearcat care team will select two names from those submissions and fans will get to vote for their favorite.  Voting will be open from November 4th -7th, and the new mascot’s name will be announced at the homecoming game against UConn on November 9 at Nippert Stadium.

“The baby will receive care, TLC, and ambassador training in the Zoo’s ambassador center until she is ready to venture out,” said Associate Curator of Interpretive Animals Amanda Chambers.  “We hope to get her up to UC to make her Fifth Third Arena debut in the second half of the 2019-20 season. Prior to that, we’ll work on getting her accustomed to the sights and sounds that she will encounter off site. She has already been exposed to black and red!”

Another name for bearcat is binturong.  The new bearcat is a subspecies known as a Palawan binturong, which is native to an island with that name in the Philippines.  The average adult weight is 20-40 pounds. The baby weighs 2.2 pounds now.