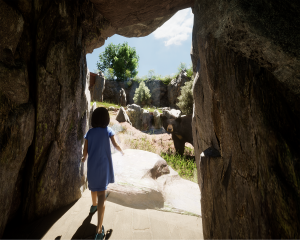 CINCINNATI, OH (April 28, 2022) — Cincinnati Zoo & Botanical Garden is excited to share plans for the area formerly known as Bear Hill.  And, yes, a bear will be one of the residents!   The “hill” is being transformed to incorporate three new habitats, Bear Ridge, Sea Otter Coast, and a habitat dedicated to North American backyard wildlife.

“The lower grotto area, which will become Sea Otter Coast, features a massive underwater viewing area where visitors will get close up opportunities to see sea otters play, eat, swim, and engage in enrichment activities,” said Cincinnati Zoo director Thane Maynard.  “The upper areas will be redesigned to provide great homes for black bears and other species native to North America.”

The habitat design includes plans to fill in existing moats to maximize space for the animals and make room for winding paths that will take people off the main Zoo loop and immerse them in Bear Ridge.

“Bear Hill was ahead of its time when it was built in 1937, but it hasn’t aged well and needed to be refreshed and upgraded to provide a great home for animals and a better visitor experience,” said Cincinnati Zoo director Thane Maynard.

The Zoo launched its More Home to Roam capital campaign in 2018 with the ambitious goal to raise $150 million by 2025 to build better homes for animals and create better experiences for guests.

“Thanks to the generosity of donors and other Zoo supporters, and despite supply-chain and other challenges we faced due to the pandemic, we have accomplished a heck of a lot since we broke ground on the first More Home to Roam project nearly four years ago,” said Maynard.  “We opened two new habitats just months after reopening our gates in 2020 and are well on our way to making the capstone of the campaign, Elephant Trek, a reality!”

Projects in progress include:

Other projects, including an upgraded habitat for our critically-endangered black rhinos and a new giraffe tower, are still in the early stages of design. Look for more information and details about those projects in the coming months.  The Zoo is on track to complete all More Home to Roam projects by 2025.  Your donation could help the Zoo reach its fundraising goal and would mean the world.