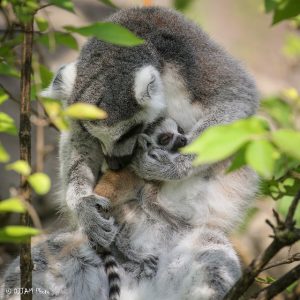 Both first-time moms are doing a great job with their babies. Visitors can see, if they’re patient and pay careful attention, the whole troop, including first-time dad Ivan, at Lemur Lookout.

“I was excited to hear about the newborn ring-tailed lemur,” said Bob Lessnau, who spent years working with this species in the field before coming to Cincinnati to head up the Zoo’s animal division.  “The stability of ring-tailed lemur populations in Zoos is crucial as wild populations endure dire straits. Like most prosimians in Madagascar, ring-tailed lemurs are threatened by habitat destruction and the bush-meat trade.”

Once a threatened species, ring-tailed lemurs are now classified as endangered and numbers are declining. Although widely distributed throughout the forests of southern and southwestern Madagascar, the charismatic creatures exist in only a few protected areas. They are the most easily recognizable lemur and the species most commonly encountered in Zoos.

“In addition to the challenges they face in the wild, lemurs are also irresponsibly reproduced by private owners and sold as pets with little concern about genetics, inbreeding or their complex social needs.  Many times, they are housed in isolation from others of their kind and receive very poor care.  Many are turned loose and dumped off at sanctuaries that struggle keep up. Zoo’s are dedicated to educating our guests, friends and followers not to buy primates as they cannot thrive as pets or on a leash,” said Evans.