CINCINNATI, OH (January 17, 2022) – As a tribute to the late Betty White on what would have been her 100th birthday, Cincinnati Zoo & Botanical Garden announced that it will name its month-old little blue penguin “Rose”.  Rose was the name of the character that White played on the wildly-popular Golden Girls sitcom from 1985–1992.

“Betty White was a huge Zoo supporter and animal lover,” said Cincinnati Zoo director Thane Maynard. “I had the pleasure of making her acquaintance years ago when she attended a Cincinnati Zoo fundraiser.  We introduced her to our first ambassador cheetah, Angel.” 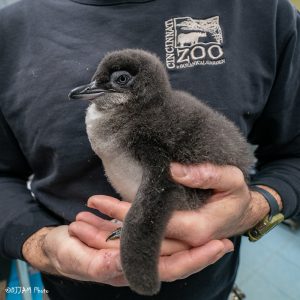 Zookeepers often get creative with animal names.  All of the Zoo’s king penguins are named after famous kings… Martin Luther, Bibi, Burger, Larry, Stacey, and Stephen.

According to bird team head keeper Cody Sowers, Rose is healthy and on track to move to the little blue penguin habitat soon.  She will join the colony of 30+ penguins, and visitors will get to see her when the weather gets warmer.