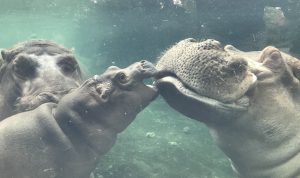 CINCINNATI, OH (October 31, 2017) – The Cincinnati Zoo & Botanical Garden is mourning the death of 36-year-old Henry, father of the famous Fiona.  He had been struggling with health issues for months and had lost hundreds of pounds.  According to vet staff who had been carefully monitoring him, he took an obvious downward turn in the past few days and was weak and unsteady.  After an exam this morning, they determined that Henry’s quality of life would not improve and made the difficult decision to humanely euthanize him.

“The blood work from Henry’s last exam gave us some hope that he was on the mend, but his appetite never returned and his condition declined rapidly.  Vets and his care team worked tirelessly to keep him comfortable and help him fight this illness. Nothing – antibiotics, favorite foods, extra TLC – seemed to turn his condition around,” said Christina Gorsuch, Cincinnati Zoo’s Curator of Mammals.  “We are all so sad to lose him.  Everyone loved him. He was a sweet, gentle giant with a big personality. He enjoyed interacting with his caregivers.” 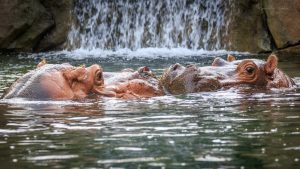 He was also smitten with Bibi, the Zoo’s 18-year-old female, and followed her everywhere.  The two were put together when Hippo Cove opened in July of 2016, and Fiona came along soon after. She was the 6th calf that Henry sired over the years and, because she survived against all odds, has become a celebrity and an ambassador for the species.  He couldn’t have left a better legacy.

“After watching Fiona fight, defy the odds and literally make history, it feels especially unfair and defeating to have to accept this outcome for Henry. While our time with him has been short in quantity, no one can deny that his quality of life before becoming ill was exceptional. From meeting, bonding and breeding with his mate Bibi, to becoming a father to charismatic and spirited Fiona, Henry’s days in Cincinnati were filled with sunshine, watermelons, waterfalls and the highest quality of care that can be provided to any animal,” said Wendy Rice, Africa Head Keeper at the Cincinnati Zoo.

For most of the summer, Henry, Bibi and Fiona played, soaked and napped together in their outdoor habitat.  After a rough start for the prematurely-born Fiona, who had to be cared for by Zoo staff for the first months of her life, the world celebrated the happy hippo family reunion. Then, for no apparent reason, Henry lost his appetite.  It came and went for several weeks during which time the care team treated his symptoms and tried to determine the cause.  A full necropsy (animal autopsy) will be performed and should help vets understand what was wrong.

“Regardless of the cause, Henry had lost too much weight to bounce back.  He was weak and starting to become disoriented,” said Dr. Jenny Nollman, Cincinnati Zoo Veterinarian. “There was nothing else we could do for him.” 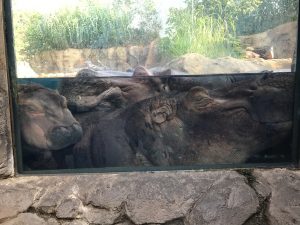 Henry, from Dickerson Park Zoo, and Bibi, from St. Louis Zoo, were the first residents of the Zoo’s Hippo Cove, arriving early last summer on a breeding recommendation from the Association of Zoos and Aquariums (AZA) Species Survival Plan (SSP).

“Henry was happy to have Bibi as his companion and, sooner than expected, to be in a bloat of three,” said Gorsuch.  “The girls will be fine as a bloat of two, but they will notice that he’s not around and may wonder why he isn’t making his contact calls.”

The median life expectancy for a Nile hippopotamus is 35 years.  Numbers have declined by 7 to 20 percent over the past 10 years and likely will continue to decline. There are estimated to be between 125,000 and 148,000 remaining in the wild.  Primary threats are poaching (for their ivory tusks and meat) and loss of habitat as more water is diverted for agriculture. The species is considered vulnerable.