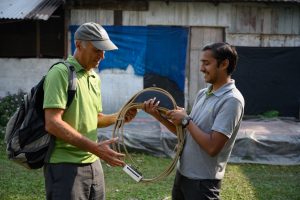 CINCINNATI, OH (August 27, 2021) — August is Asian Elephant Awareness Month, a great time to call attention to the challenges facing this magnificent species and to spread the word about Cincinnati Zoo & Botanical Garden’s commitment to helping them survive in their native habitats and building a new home, Elephant Trek, where they can thrive in Cincinnati.

“While we are creating a world-class home for the elephant herd at the Cincinnati Zoo, we are also supporting efforts to save their wild counterparts,” said Cincinnati Zoo director Thane Maynard. “We’re partnering with the Asian Nature Conservation Foundation (ANCF) in India, where 60% of the remaining Asian elephants live, to track elephant movements so people in the area can be alerted when a herd is headed their way!”

Most elephants in this region live outside national parks and overlap with millions of people. Knowing their location reduces instances of human-animal conflict and destruction and promotes coexistence. 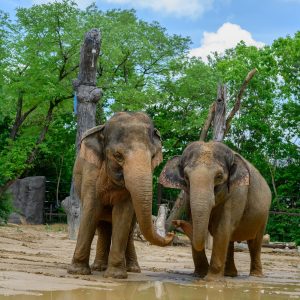 “The ANCF team is using GPS collars to discover where herds trek when they leave the national park boundaries, which happens more often during the rainy season when the parks flood,” said Maynard. “Mapping the elephants’ paths and the essential forested corridors through community lands and tea farms will help our partners to guide the communities to maintain land use that is elephant-friendly.”

The Cincinnati Zoo team is also actively involved in the Asian Elephant SAFE (Save Animals From Extinction) Program (AeSP), initiated by the Association of Zoos and Aquariums (AZA), which has these primary goals:

Cincinnati Zoo is developing innovative projects to get more of its audiences involved in Asian elephant conservation.  There are also many ways to advance the Zoo’s mission to bring people “close enough to care” about this species, including making a donation to help build Elephant Trek.