CINCINNATI (November 19, 2015) – Escorting the last Sumatran rhino in the Western Hemisphere, “Harapan (Harry)” on a 53-hour journey from the Cincinnati Zoo & Botanical Garden to the Sumatran Rhino Sanctuary (SRS) was a huge responsibility and anything but fun, especially for keeper Paul Reinhart who witnessed this rare rhino’s birth in 2007 and cared for him for the past two years in Cincinnati.

Zoo veterinarian Jenny Nollman, who accompanied Harry on the long journey to monitor his health, said that she felt an immense sense of relief the moment he backed out of his crate into the mosquito-netted enclosure at SRS.  “It was one of the biggest senses of relief I think I’ve ever had in my life. It was like… We made it.  We’re done.  This enormous journey is over and he looks great!  It was a very happy moment.”

A collective sigh of relief could be heard from SRS staff members and Dr. Terri Roth, Director of Cincinnati Zoo’s Center for Conservation & Research of Endangered Wildlife (CREW) as they watched Harry take the first steps in his new home and enthusiastically munch on a pile of leafy branches! 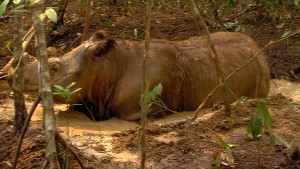 “Seeing Harapan in this environment and knowing that he’s already heard one of the other rhinos and is no longer alone is very, very satisfying,” said Roth, whose research at CREW led to the births of Harry and his two siblings. She is confident that Harry will know what to do when it’s time to breed. His brother Andalas, born at the Cincinnati Zoo in 2001 and now living at SRS, has sired one calf with 12-year-old Ratu.  She is now pregnant with a second calf and is expected to give birth in May.

The trip was tough, but leaving Harry behind when it was time to head back to Cincinnati was far more difficult for Reinhart, who stayed by his crate all the way to SRS and slept by his enclosure on their final night together. “I’m okay.  This is the right thing to do. It’s tropical and rhino weather every day. He’ll have a mud wallow and a girlfriend.  He’s going to be fine,” said Reinhart.

Reinhart and Roth hope to remain involved with the breeding program at SRS.  They will continue to collaborate and help as needed, but the survival of this species is now in the hands of the Indonesians, according to Dr. Roth.

WHY IS THIS IMPORTANT?

Harapan is on a mission to mate to help save his critically-endangered species from extinction. The hope is that Harry will sire a calf with one of the three females at SRS.

There are fewer than 100 Sumatran rhinos left in the world.  The Cincinnati Zoo’s Sumatran rhino breeding program produced three calves, including Harry, between 2001 and 2007, due to groundbreaking reproductive research by Dr. Roth and the scientists at CREW.