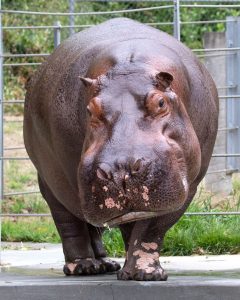 CINCINNATI, OH (September 7, 2021) — Bibi, mother of world-famous hippo Fiona, has a new boyfriend! Huge, dark, and handsome Tucker arrived in Hippo Cove last night accompanied by care staff from Cincinnati Zoo & Botanical Garden and San Francisco Zoo, where the 18-year-old hippo has lived since 2011.  He was named Tucker when he was born but was known to San Francisco Zoo visitors as Bruce, a tribute to San Francisco Giants’ manager Bruce Bochy.

“We will call him Tucker, since his San Francisco nickname wouldn’t have the same meaning in Cincinnati as it did in the Giants’ home town,” said Cincinnati Zoo director Thane Maynard. “Besides, we have our own baseball connection here.  Tucker will join Cincinnati Reds’ catcher Tucker Barnhart at the top of the most popular Cincinnati Tuckers’ list.  Barnhart even sent the new hippo a welcome message!”

Bibi, age 22, and Tucker will take things slowly and spend time by the pool bonding and sharing beets, squash, melons, and hay.  According to the Zodiac, the Aquarius and Taurus might butt heads a lot but are also good candidates for a long-term, stable relationship.

“The Association of Zoos and Aquariums’ Hippo Species Survival Plan (SSP) recommended that Tucker move to Cincinnati to be Bibi’s companion and to enjoy being part of a hippo pod. If a baby is in their future, it will be way down the road before that happens” said Cincinnati Zoo’s director of animal care, Christina Gorsuch. “Bibi and Tucker will get to know each other by being in close proximity in the indoor habitat before they share the same space.  After that, they will explore the outdoor habitat together.  It may be a few weeks before visitors catch a glimpse of the new guy.”

Four-year-old Fiona will join Bibi and Tucker as soon as the couple demonstrate that they are comfortable with each other.  The hippo care team is aware that Fiona fans travel from all over the world to see her, so they will do everything possible to maximize her outdoor time during the introduction period.  If there are days when she will not be visible, the Zoo will post that information on its website – cincinnatizoo.org.  Be sure to check before you visit!

“Male hippos are typically larger than females, and that is true in this case.  Tucker weighs about 4,500 pounds, which is 1000 more than Bibi. They both eclipse Fiona, who has not yet reached the 2,000-pound milestone,” said Gorsuch.  “Another thing that’s different about males is the way they poop. They spin their tails like a propeller and spray feces everywhere.  It’s actually entertaining to watch but creates a big mess for keepers to take care of in the hippo barn!”

According to Tucker’s keepers at San Francisco Zoo, guests loved watching him in his pool, playing with enrichment items and snacking on his favorite foods – melons, beets, squash, hay and grain.  Those prized items will all be included in his diet in Cincinnati.

A date for Tucker’s public debut has not yet been set. Opportunities will be posted on cincinnatizoo.org. The Cincinnati Zoo opens daily at 10 a.m.

While not considered endangered, Nile hippos share ecosystems with many critically endangered species including elephants and rhinos. As an indicator species, the hippos’ plight can provide information about the challenges being faced by other species in their native lands. Addressing issues at the ecosystem level helps all of the other species living in the same regions.

Special thanks to DHL for bringing Tucker from California to Ohio!