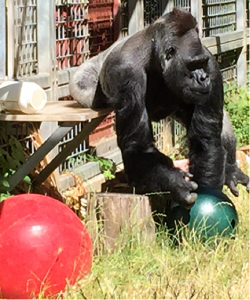 CINCINNATI (June 14, 2019) – Ndume [nnn-doo-may] is home! The 37-year-old silverback gorilla arrived safely at the Cincinnati Zoo & Botanical Garden this morning and is settling in behind the scenes in Gorilla World.

“We are thrilled that Ndume is finally here.  We’ve been preparing for his arrival for many months and are ready to offer him an environment, schedule and social status that work for him,” said Cincinnati Zoo Director Thane Maynard.

The Zoo has been working to bring Ndume back to Cincinnati, where he was born, since last summer when the Association of Zoos and Aquariums’ (AZA) Gorilla Species Survival Plan® (GSSP) made the recommendation to transfer him from The Gorilla Foundation (TGF), in California, following the death of its only other gorilla, Koko. He was sent to TGF in 1991 to be a social companion for her.

“Gorillas require and desire to be near other gorillas,” said the Zoo’s Curator of Primates, Ron Evans. “I first met Ndume when he was 3 years old and have followed him on his life journey. He provided a great service for Koko as a gorilla companion, and we’re so happy that he can now rejoin our gorilla family.”

He is in close proximity to the Zoo’s two gorilla groups, and the plan is for him to eventually form a third group.  Introductions will be done at his pace, and the gorilla team will assess which females are the best fit for him.

“It may be many weeks before the public can see Ndume.  Like with all new gorillas, we want to make sure that he is comfortable with his new home, keepers, and routines before introducing him to zoo guests,” said Evans. “Patience is always the key when acclimating new gorillas.”

The Cincinnati Zoo supports wild gorilla conservation efforts like the Nouabalé-Ndoki Project [programs.wcs.org] in the Republic of Congo [en.wikipedia.org].  This project includes the Mbeli Bai Study [mbelibaistudy.org], the longest running research being done with wild western lowland gorillas.  Through research, local education programs, publications and documentaries, the Mbeli Bai Study and other gorilla related efforts there are raising international awareness for gorillas and their struggle for survival. For more information, visit www.cincinnatizoo.org [cincinnatizoo.org].