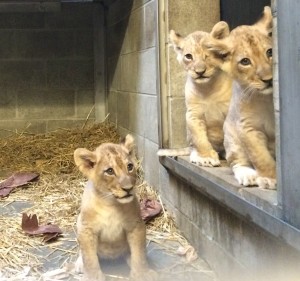 Huruma, which means compassion in Swahili, was chosen by Cincinnati Zoo’s lion keepers and curator to honor a recently-deceased colleague from the St. Louis Zoo who helped hand raise “Imani,” the mother of the cubs, and possessed this quality.

More than 2,000 name suggestions were submitted via Facebook and Twitter for cub #2. Kya, which means diamond in the sky, received more votes, 32%, than the other four finalists, “Mara,” “Mena,” “Kendi,” and “Binti.” Tracy Stinson, whose name was randomly drawn from the seven people who suggested Kya, will receive two tickets to Disney’s The Lion King, playing at the Aronoff Center this spring.

Employees of Western & Southern, the donor that made the lion exhibit possible, chose to name cub #3 Willa in honor of the company’s former chairman and CEO, the late William J. Williams. The Cincinnati community may have known Williams best as a partner in the Cincinnati Bengals and a former principal owner of the Cincinnati Reds. He was a former Chairman of the Board of and a major donor to the Taft Museum and was a strong supporter of the Fine Arts Fund.

Born on November 13, 2014, to first-time parents, “John” and “Imani,” the cubs have been off exhibit bonding with mom and will soon be introduced to dad. “The introduction process has already begun. John and the cubs have had positive interactions during several nose-to-nose “howdy mesh” sessions. We’ll continue to monitor their behavior and will put the pride together when the time is right,” said Josh Charlton, Curator of Mammals.

Imani was born at the St. Louis Zoo and came to the Cincinnati Zoo as the result of a breeding recommendation from the Association of Zoos & Aquariums (AZA) Lion Species Survival Program (SSP). She was introduced to John earlier this year, and this is the first litter for both of them.

Lions are considered vulnerable by the International Union for Conservation of Nature as the result of climate change, hunting and habitat loss. Following a review of the best available scientific information, on October 27, 2014, the U.S. Fish and Wildlife Service proposed listing the African lion as threatened under the Endangered Species Act (ESA). The agency’s analysis found that lions are in danger of extinction in the foreseeable future.

« Name the Lion Cubs!
Baby Bonobo On the Way! »