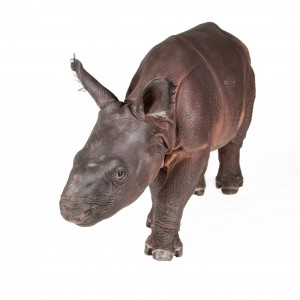 CINCINNATI – (June 12, 2014) The Cincinnati Zoo & Botanical Garden’s Center for Conservation & Research of Endangered Wildlife (CREW) and the Buffalo Zoo, in Buffalo, New York, are excited to announce the birth of a female Indian rhino calf produced by artificial insemination (AI), and born on June 5. From a historical standpoint, this is the first offspring for a male rhino who never contributed to the genetics of the Indian rhino population during his lifetime – a major victory for endangered species around the world and a lifetime of work in the making.

The father, “Jimmy,” died at the Cincinnati Zoo in 2004 and was dead for a decade before becoming a father for the very first time!  Over the course of those ten years, Jimmy’s sperm was stored at -320°F in CREW’s CryoBioBank™ in Cincinnati, before it was taken to Buffalo, thawed and used in the AI. 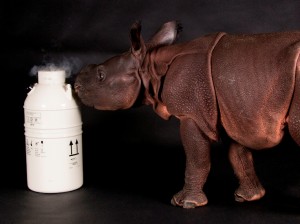 “We are excited to share the news of Tashi’s calf with the world as it demonstrates how collaboration and teamwork among the Association of Zoos & Aquariums (AZA) organizations are making fundamental contributions to rhino conservation,” said Dr. Monica Stoops, Reproductive Physiologist at the Cincinnati Zoo’s CREW. “It is deeply heartening to know that the Cincinnati Zoo’s beloved male Indian rhino Jimmy will live on through this calf and we are proud that CREW’s CryoBioBank™ continues to contribute to this endangered species’ survival.”

“Tashi,” the Buffalo Zoo’s 17-year-old female has previously conceived and successfully given birth through natural breeding in both 2004 and 2008.  Unfortunately, her mate passed away and the Buffalo Zoo’s new male Indian rhino has not yet reached sexual maturity. Because long intervals between pregnancies in female rhinos can result in long-term infertility, keepers at the Buffalo Zoo knew it was critical to get Tashi pregnant again and reached out to Dr. Stoops for her expertise. 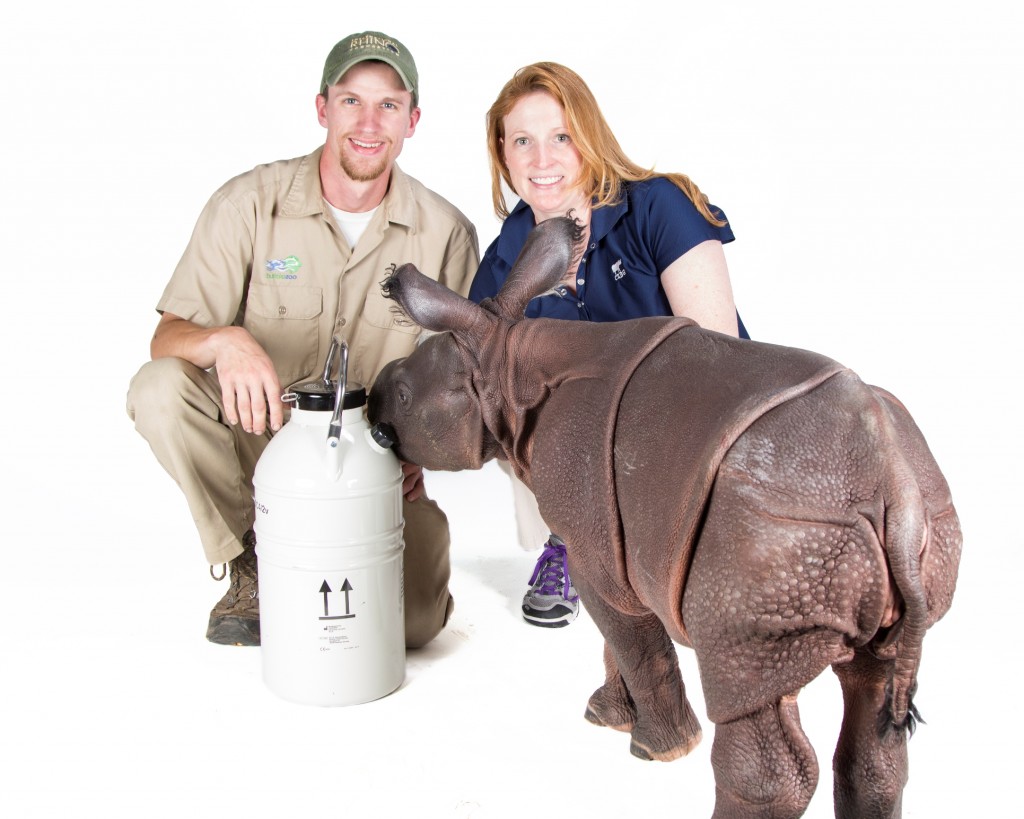 In February of 2013, Dr. Stoops worked closely with Buffalo Zoo’s rhino keeper Joe Hauser and veterinarian Dr. Kurt Volle to perform a standing sedation AI procedure on Tashi. Scientifically speaking, by producing offspring from non or under-represented individuals, CREW is helping to ensure a genetically healthy zoo population of Indian rhinos exists in the future.  This is a science that could be necessary for thousands of species across the globe as habitat loss, poaching, and population fragmentation (among other reasons) threaten many with extinction.

“Tashi and the calf are doing well, and are spending this time bonding indoors,” said Hauser. “Over the next few weeks rhino keepers will continue to monitor their time together and as the calf gets stronger and more confident we will make the announcement on their official public debut.”

The Buffalo Zoo staff monitored Tashi’s pregnancy over the 15-16 month gestation period and at 3:30 p.m., on June 5, she gave birth to a healthy female calf, weighing 144 pounds.  Through ultrasound technology Dr. Stoops and keeper, Joe Hauser, were also able to successfully predict the calf was female.

“Without Dr. Stoops’ dedication to the species, and to the development of AI science, there is no doubt this calf would not be here today,” said Hauser. “She has spent countless hours spear-heading research and technology for Indian rhino conservation and the Buffalo Zoo is excited to acknowledge that dedication and announce that the name of the calf is “Monica.”

Tashi’s calf demonstrates that AI science is a repeatable and valuable tool to help manage the Indian rhino population in zoos. With only 59 Indian rhinos in zoos in North America and approximately 2,500 remaining in the wild, being able to successfully introduce genetics that are non or under-represented in the population is critical to maintaining the genetic diversity necessary to keep a population healthy and self-sustaining.

“We are always thrilled to welcome a new baby to the Buffalo Zoo, but this birth is particularly exciting because the science involved is critical to saving endangered animals,” said Dr. Donna Fernandes, President of the Buffalo Zoo. “This type of professional collaboration among AZA Zoos is vital to the important work we do as conservation organizations and we are honored to play a critical role.”