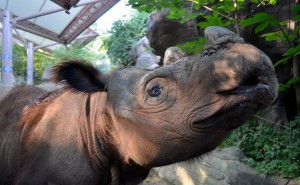 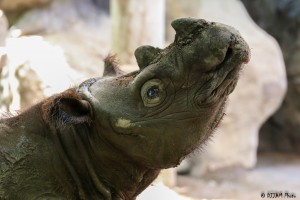 During a press conference held to announce Harapan’s departure, Dr. Terri Roth, Director of the Zoo’s Center for Conservation & Research of Endangered Wildlife (CREW) said,  “Despite the great personal sadness so many of us feel both about Harapan leaving and Cincinnati Zoo’s Sumatran rhino breeding program coming to an end, we need to focus on all we have accomplished, for there is much to celebrate.  The Cincinnati Zoo has had a profound, historic impact on the effort to save this species.”

Harapan, the third of three calves born at the Cincinnati Zoo, is the only Sumatran rhino, also called the “hairy rhino” because of its hairy body, living outside of Southeast Asia.   He is sexually mature and his opportunity to breed and contribute to his species’ survival exists only at the Sumatran Rhino Sanctuary (SRS), a breeding facility in the Way Kambas National Park of Indonesia.  SRS is home to Harapan’s brother Andalas, as well as the son that Andalas sired at the sanctuary in 2012, and three possible mates for Harapan. 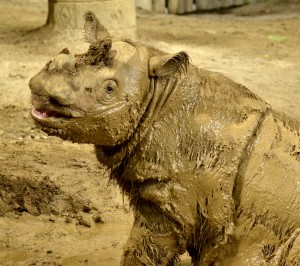 Approximately 100 of Harapan’s kind remain in the world and only nine are cared for in zoos. Also known as the “hairy rhino” because of its hairy body, the remaining wild Sumatran rhinos are scattered throughout fragmented rainforests in Southeast Asia, making it difficult for the animals to find each other and reproduce.  Last week scientists declared the species extinct in the wild in Malaysia, dealing another blow to a species already considered to be the most endangered rhino.

“Though the numbers are frighteningly low, Sumatran rhinos still exist in the forests of Sumatra, we believe there is still time to save them and we are by no means giving up that fight now.  Ultimately, the responsibility for saving this magnificent species now lies squarely on the shoulders of our Indonesian colleagues.  Our hope is that they succeed beyond all of our wildest dreams,” said Dr. Roth.  “We will all rejoice when we hear news of another birth – a son or daughter of either Andalas or Harapan,” said Dr. Roth. 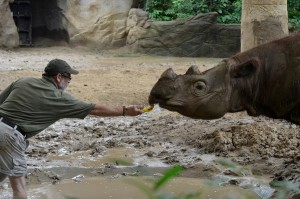 An exact date for Harapan’s departure has not been set but the Zoo is pushing for the move to happen this fall. Moving an 1,800-pound animal such a great distance requires special training, multiple permits and coordination between governments.  Paul Reinhart, Team Leader, Wildlife Canyon and the Zoo’s most experienced Sumatran rhino keeper, and Zoo Veterinarian Dr. Jenny Nollman will be accompanying him on his journey.

Harapan is the only Sumatran rhino on view to the public anywhere in the world. Zoo visitors can find him in Wildlife Canyon daily from 9 a.m. – 12:30 p.m., weather permitting, until he leaves for Indonesia.