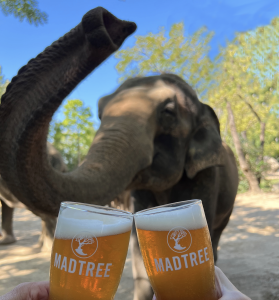 Team Up on New Beer to Benefit Elephants

CINCINNATI, OH (October 3, 2022) – Cincinnati Zoo & Botanical Garden and MadTree Brewing have teamed up to create a special beer that tastes somewhat like a Mai Tai cocktail and pays tribute to Mai Thai, the oldest elephant at the Zoo. The new brew is called “Oh Mai”!  Proceeds from sales of the ”Oh Mai”beer at MadTree on October 4th will benefit elephant conservation.

“Oh Mai has some really nice citrus notes with that subtle spice character in the background,” said MadTree head brewer, Ryan Blevins. “It’s super refreshing, and I think it’s going to be a hit.”

Many Reds fans remember Mai Thai the elephant throwing out the first pitch, with her trunk, decades ago. Over the last 40+ years, she has served as an ambassador animal for the Cincinnati Zoo, representing all of her Asian elephant counterparts in the wild.

“Trunks and Trees – what a natural collaboration,” said Cincinnati Zoo vice president of marketing & visitor experience, Chad Yelton. “We invited brewers from MadTree to the Zoo to meet Mai Thai and draw inspiration from her and the elephant care team. That’s all it took and the concept for the beer was born.  We are extremely excited for everyone to try the new brew for the Zoo!”

Oh Mai is on tap at the Cincinnati Zoo’s craft beer garden, Hops, as well as the MadTree Taproom in Oakley while supplies last. There will be a special “give-back” day in the MadTree Oakley location on October 4th benefiting elephant conservation and the Cincinnati Zoo’s More Home to Roam campaign, which includes a new, world-class home for Mai Thai and the rest of the Zoo’s elephant herd.