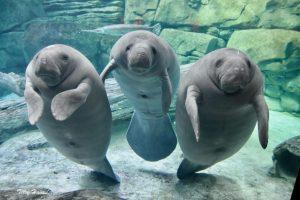 SwimShady, Alby, and Manhattan set to leave in early October

CINCINNATI, OH (September 20, 2022) – After 18 months of rehabilitation in Cincinnati Zoo & Botanical Garden’s Manatee Springs, orphaned manatees SwimShady, Alby, and Manhattan are ready to return to their native Florida waters.  The Zoo has been participating in the U.S. Fish & Wildlife Service’s Manatee Rescue & Rehabilitation Partnership (MRP) for the past two decades and has cared for 23 manatees, including the three that will depart in early October.

“Our primary goal, as a second-stage care facility, is to provide plenty of food and get the manatees to a healthy weight,” said Cincinnati Zoo curator Kim Scott. “These three have consumed about 166,158 lbs of food, mostly lettuce, during their time here and have gained a combined total of about 1000 pounds.”

Nineteen manatees rehabilitated at the Cincinnati Zoo have returned to Florida waters, and Alby, Manhattan, and SwimShady will be released after they become reacclimated at one of the care facilities in Florida.

“The goal of the MRP is to rescue, rehabilitate, and release manatees, and we’re honored to play a role in this important conservation work,” said Scott.  “In addition to rehabbing manatees, we get to educate and inspire visitors when they see these amazing creatures!”

Unfortunately, there are many more manatees in need of rehabilitation, so more will be coming to Manatee Springs later this year. Information on the new manatees and when they will arrive will be announced soon.

Cincinnati Zoo is one of a handful of facilities outside of Florida that provide non-critical care for manatees.   Providing second-stage care opens up valuable space at critical care facilities and gives Midwesterners the opportunity to learn about these remarkable animals.

The Florida manatee, downgraded from endangered to threatened in 2017, continues to be at risk from both natural and man-made causes of injury and mortality. Exposure to red tide, cold stress, and disease are all problems that can affect manatees. Human-caused threats include boat strikes, crushing by flood gates or locks, and entanglement in or ingestion of fishing gear. For the last two years the Atlantic coast population has been experiencing alarmingly high mortalities. A record 1,100 manatees died last year and more than 600 so far this year. Manatees are starving because pollution from agriculture, septic tanks and urban runoff is killing the seagrass on which they rely. The population is believed to be at least 13,000, with more than 6,500 in the southeastern U.S. and Puerto Rico, mostly in Florida. The significant decline of their food source on the Atlantic coast will most likely have long term effects on the overall population.